Elections for the European Parliament have been held every five years since 1979, but none have been as crucial as this 8th edition, taking place from 22 to 25 May. The euroskeptic parties poised to win are set on freezing, or even reversing half a century of European integration.

Not that the average European voter (if such a strange beast exists) seems to give a hoot. Turnout dropped below 50% in 1999, and looks set to continue its downward trend.

But the twin evils of voter apathy and anti-EU populism will not win the day unopposed. Leading the fightback is the European Parliament itself. On its Facebook page, the 751-member assembly proposes parlour games and a map of national dishes – one for each of the 28 member states – to turn the election results marathon on tv into an evening filled with transnational fun and culinary delights.

Clearly, the European Parliament is drawing inspiration from the Eurovision Song Contest, the annual competition to find the continent’s kitschiest song. The annual finale of that televisual feast spawns innumerable house parties across Europe, to cheer on national favourites and to gawk at the parade of outrageous costumes, competitors and compositions.

Eurosong may be palatable only with a stiff dose of irony, but the fact remains that it is a genuinely popular, continent-wide event at which European countries compete with and vote for each other. If only that other European project could borrow some of Eurosong’s uniquely unifying vibe. 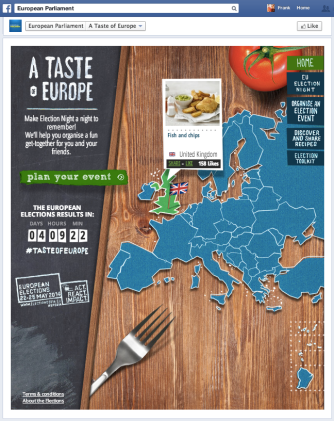 That’s what A Taste of Europe is trying to do. As explained on the initiative’s starting page on the European Parliament’s Facebook:

You live in Europe, you work in Europe, come 22-25 May you will be voting for Europe – now have a Taste of Europe.

Celebrate Europe by making a feast of the European elections […] Election Night is when you finally get to see for yourself what impact you made on Europe’s future, so why spend such a big night alone? Why not host a fun EU Election Night for your friends and family, so you can watch – and hopefully celebrate – the election results together?

Just take a second to take stock of the fact that the European Parliament has just taken over party-planning your life. If you see nothing wrong with that, you are beyond redemption and may proceed to download the entire ‘election toolkit’.

That kit consists of personalisable popcorn boxes, napkin rings with EU member state flags, drinks markers to prevent your guests mixing up their glasses (that would just be too hilarious!), and even a fun game where you stick a random flag to your forehead and have to guess which EU member country you are by asking your friends pertinent yes-no questions (“Are my main exports footwear and pharmaceuticals?”)

When the time comes, the app will even include a live stream of the election results. So there really is no escaping the fun. Meanwhile, your guests could each prepare a national dish to bring to the event. A handy map provides an overview of the EU’s favourite dishes.

Each favourite has been selected from a wider list of national recipes via the pseudo-democracy of ‘likes’. If you don’t see your favourite dish among the list, you could always add your own recipe (although we doubt whether Reindeer Pad Thai or the mysteriously-named ‘5677778’ really are Austrian specialty foods).

What do these dishes and their relative popularity tell us about the state of European democracy? 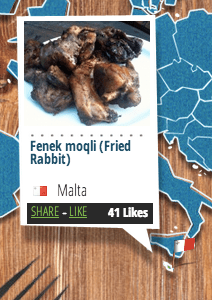 Maltese rabbit does not have the same ring to it as Maltese falcon. 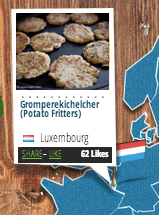 Like the Maltese, there just aren’t enough Luxies to vote this dish up in the rankings. 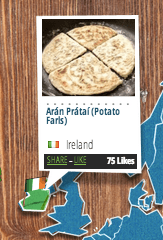 Not shunning the cliché, Ireland’s favourite dish consists of… potatoes! At least the Irish name is marginally more pronounceable than the Luxembourgish one. 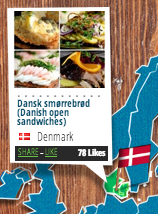 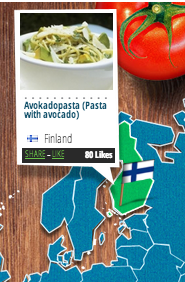 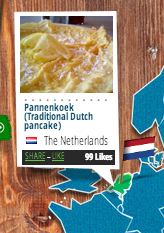 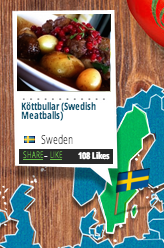 An interesting variant to the chicken-and-egg question: What was popular first, Ikea or Swedish meatballs? 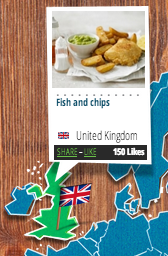 This shows just how out of touch the EU is with the groundswell of British public opinion. Everybody knows that chicken tikka masala is Britain’s favourite food. Or is it Chinese stir-fry now?

Cyprus is only half-in the EU; the Turkish north doesn’t get a say. But the food is ecumenical at least: flaounes are a delicacy eaten both at Easter and during Ramadan. 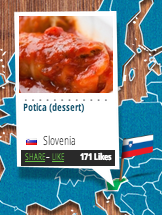 Sweet yeast dough rolled around a filling of nuts, honey, butter, raisins and cinnamon. Slovenia’s greatest contribution to the world. Or do you know of any other? 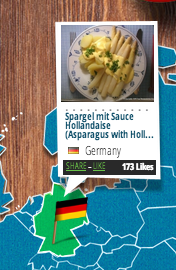 The German favourite dish shows two things: the ‘Europeanisation’ of Germany (which other country elects a food covered in Dutch sauce?) and its diminished enthusiasm for the European project (only as many votes as tiny Slovenia?) 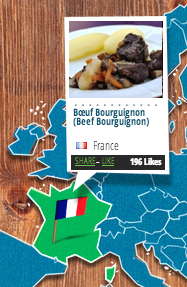 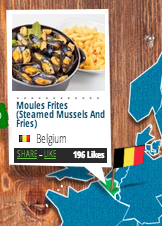 One of the few things most Belgians can agree on. 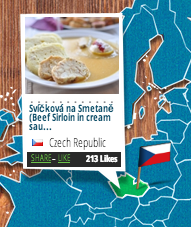 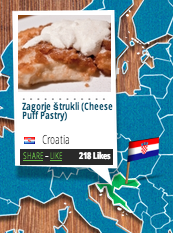 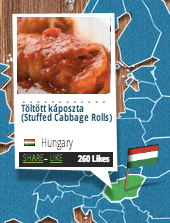 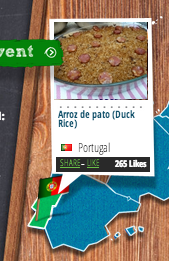 In northern Portugal, you’ll find very few ducks voting for Christmas. That’s when they’ll end up in this seasonal favourite. 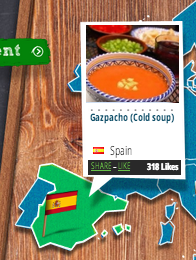 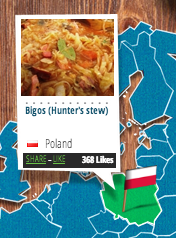 The recipe doesn’t say how many hunters you need for a stew. 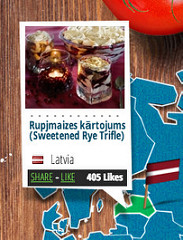 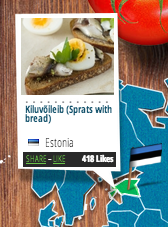 Who knew Estonians were this desperate to be Scandinavian? 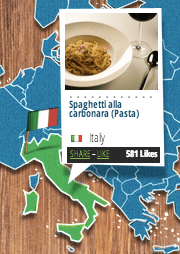 A simple, but strict classic: should only consist of al dente spaghetti, egg, cheese and pork (guaniciale – pig’s cheek – if you can get it). 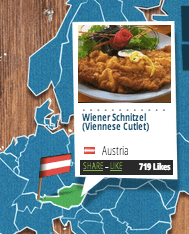 The highest-ranking food from Western Europe; as with Eurovision, Austria uses its pivotal position between east and west to garner votes from either side. 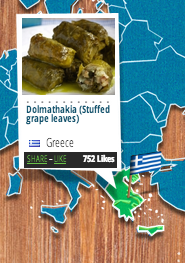 The appetizer that is as classically Greek as Alexander the Great. But wait, wasn’t he Macedonian? 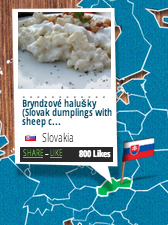 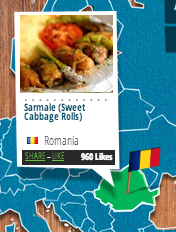 Romania shares with Hungary a predilection for cabbage-based dishes, but is about four times as proud of it. 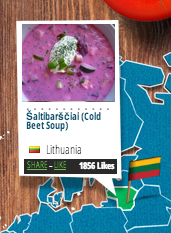 Relatively few in numbers, the Lithuanians are still enthusiastic enough about the EU to vote their favourite dish high up in the rankings. That, or cold beet soup must be a lot more delicious than it sounds. 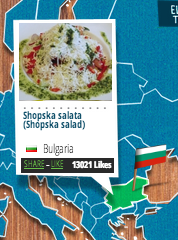 Winner by a massive landslide, crowning the evidence that, like Eurovision, A Taste of Europe is heavily dominated by Eastern Europe. But there is a twist to the Bulgarian win: some commenters suggest that shopska salata it is as much a Serbian dish, and perhaps even more so than a Bulgarian one. But Belgrade gets nulle points, as Serbia is still outside Brussels’ political (and culinary) orbit.

Meanwhile, the real European elections are crucial for another reason: for the first time, the European Parliament will directly elect the President of the European Commission (currently José Manuel Barroso).

The change is hoped to amplify the relevance of the European elections, revive the interest of the voters and increase turnout. But of course, the EU wouldn’t be the EU if the process wasn’t overly complex and only marginally democratic.

The candidates for the five-year EC presidency were put forward by the so-called Europarties, the half-dozen ideological alliances within the European Parliament. They are: Guy Verhofstadt from Belgium (for the liberals), the tandem José Bové from France and Ska Keller from Germany (for the greens), Martin Schulz from Germany (for the social democrats), Jean-Claude Juncker from Luxembourg (for the centrists), and Alex Tsipras from Greece (for the leftists).

Neither of them is electable throughout all member states. The European Council will draw up a shortlist of presidency candidates based on the overall performance of the Europarties, and then present that list to the newly-elected European Parliament for its consideration.

Hardly an electrifying prospect, but then: How are you going to govern a continent famous for its countless culinary treasures, which then elects a Bulgarian salad as its top dish?

Images taken here from the European Parliament’s Facebook page, about a day before the article was written (hence the discrepancy between the ‘likes’ on the pictures and in the text).

Universal basic income can secure basic independence for citizens, something which modern states have failed to do, argues author Louise Haagh.
Up Next

An Art Exhibition About an Art Critic?

Nobody goes to a baseball game to watch the umpires, so why would someone go to a museum to see an exhibition dedicated to an art critic—one of those arbiters […]