Cuddly toys, ripped to pieces. Their limbs and tails, snouts and eyepatches strung up and nailed to a museum wall. Teddy bears and their furry friends are supposed to be a child’s last line of defence against night terrors. But here, perversely, they themselves become the terror: cruelly chopped up and grotesquely rearranged into a nightmarish tableau.

But this is more than a grisly trophy wall. The chaotic collage of cheerful colours and big childlike eyes and grins is arranged in a familiar, hexagonal shape: the contours of France. The westernmost tip of Brittany is marked by what looks like a pair of ears, or perhaps wings – blue in any case. A dolphin’s tail helps flesh out part of the Pyrenees border with Spain. The Alsatian border with Germany is shaped by bear’s legs, and one baby doll leg the companion of which dangles from the southern coast of Brittany. The country’s body is bulking with paws and arms and legs and heads… 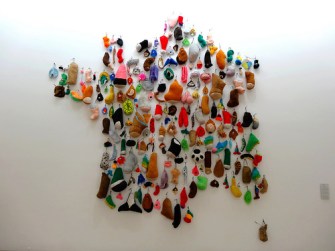 This is a work by the French artist Annette Messager. One of her recurrent themes is the ambivalence of childhood, that magical era of firsts. Never again will joy and terror be so fresh, so intense. It’s also a phase of life bounded by the comforts of innocence, and the thrills of experience. Not neatly separated, but intermingling. Hence the chopped-up teddies. But there’s a twist to the work, and the clue is in the cartographic form it represents – and in its title, the delightfully French expression: Faire des cartes de France.

The expression goes back to the reign of Louis XIII (b. 1601 – d. 1643), who ascended to the throne as a nine-year-old. When the adolescent king reached puberty and had his first wet dreams, his courtiers euphemistically referred to the young king’s nighttime soiling of the bedsheets as ‘making maps of France’. Which is not merely a poetical way of describing those stains – probably not neatly hexagonal, but France back then wasn’t either – but also calculatingly political: considering the future of the kingdom depended on Louis XIII’s loins, the phrase also expressed the hope that he would measure up to the physical practicalities of dynastic succession.

Which brings to mind an expression from across the Channel, much later and not of royal origin, but also concerned with procreation for the good of the nation: Close your eyes and think of England. I wonder how that would look as wall art.

Many thanks to Philippe Gonzalvez (a.k.a. #363), who saw this artwork in LaM, the Art Museum of Villeneuve-d’Ascq (a new town near the northern French city of Lille) and sent in a picture of it. Here is the museum’s page on Annette Messager’s work.

When We All ‘Talk Like TED,’ TED Will Go Mum. Here’s Why.

Earlier today the game designer and philosopher Ian Bogost tweeted the above photo, signaling that TEDism—the look and feel of those incisive idea-filled talks from TED conferences—is spreading far and […]