Portolan Charts 'Too Accurate' to be Medieval

Who in history was clever enough to have made these maps? 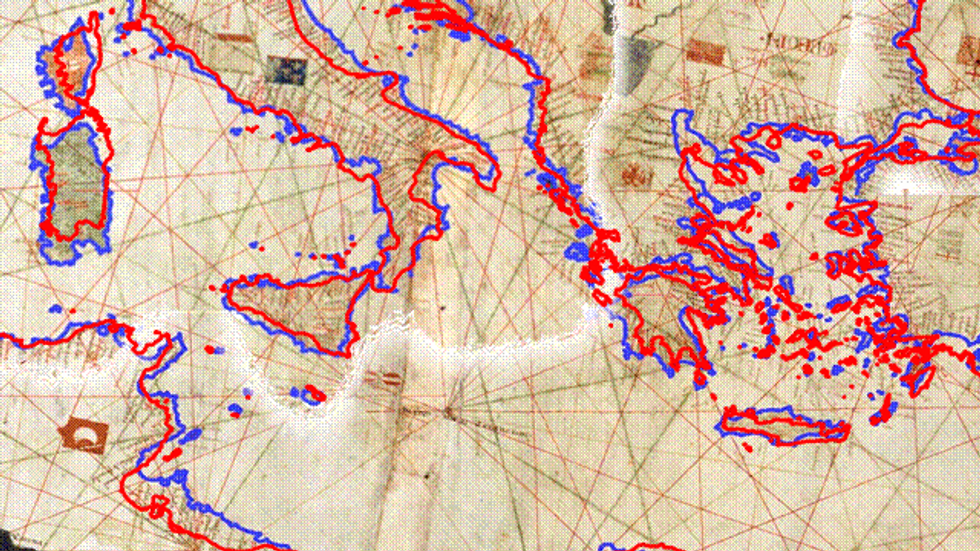 Portolan charts, it was always assumed, were compiled by medieval European mapmakers from contemporary sources. A Dutch doctoral dissertation now disproves this: these nautical charts are impossibly accurate, not just for medieval Europe, also for other likely sources, the Byzantines and the Arabs. So who made them – and when?

Mystery has always shrouded the sudden emergence, seemingly ex nihilo, of portolan charts. The oldest known example emerged in Pisa around 1290, without any obvious antecedents. This Carta Pisana kick-started a tradition of amazingly accurate sea charts almost up to modern standards, although as with most other portolans, that accuracy was mainly limited to the Mediterranean and the Black Sea.

A typical portolan chart showed coastal contours and the location of harbours and ports, ignoring virtually all inland features. It would be criss-crossed by straight lines, connecting opposite shores by any of the 32 directions of the mariner's compass, thus facilitating navigation.

After popping up in Italy, portolans became coveted possessions in the seafaring nations of Spain and Portugal, where they ranked as state secrets.

Little or nothing is known of their origins and production, so the working hypothesis among cartographic historians was that portolans were somehow gathered together from the knowledge of medieval European sailors, possibly enhanced with older knowledge from Byzantine or Arab sources.

That hypothesis has now been disproven by Roelof Nicolai, a Dutch geodetic scientist who on 3 March 2016 obtained his doctorate degree from Utrecht University for a dissertation titled A Critical Review of the Hypothesis of a Medieval Origin for Portolan Charts.

In it, Nicolai puts forth the theory that portolan charts were made using techniques that were not at all available to medieval Europeans. So they must have copied them from unknown older sources – in all likelihood while failing to grasp how accurate those maps really were.

Nicolai demonstrates that portolans achieved their accuracy by using what seems like an early version of the Mercator Projection – almost three centuries early. Only in 1569 would the Flemish cartographer introduce his mathematical method of projecting spherical data onto a flat surface that would prove crucial to navigation (straight lines on the map equal straight lines at sea).

In blue: portolan shorelines; in red: actual shorelines. A close match in the Mediterranean and Black Seas, wildly off the mark in the British Isles and the Baltic.

“The portolan maps I've researched all seem to be made using the Mercator Projection”, Nicolai says. “They've all clearly been produced on medieval parchment, but those mapmakers probably didn't realise the accuracy of the maps they were producing. We immediately recognise the shape of the Mediterranean, but even in the Late Middle Ages, that shape was far from established on maps. Nobody really knew how all of the Mediterranean's shorelines ran”.

Nicolai also showed that the portolans weren't produced as single pieces, but in fact are a mosaic: “There are obvious differences of scale and orientation between different areas on portolan maps. Not only does that demonstrate clearly that they were collated from different maps, it also shows that those medieval cartographers were not familiar with the techniques used to produce those different sources”.

The doctorandus also tried to replicate the presumed method by which portolan charts were produced, by averaging the data from numerous single sailing records detailing the location of harbours, the directions of sail, etc. The resulting accuracy was worse by a factor of 10 to that of the actual portolan charts – even while using methods of calculation averages that were developed only at the end of the 17th century. Only in the 19th century did cartographers manage to re-achieve the accuracy of the portolans.

So who was the producer of this anachronistic accuracy? Nicolai only points to the likely source of the maps: Constantinople. “But it is highly unlikely that they were produced there as well. As far as we can tell, the Byzantines really didn't add much to the scientific knowledge inherited from the Classical Age. They only acted as a repository for ancient Greek and Arabic knowledge. And why would the Byzantines even try to chart English and French coastlines? Those were way beyond their sphere of interest”.

Could portolans have an Arabic background? After all, the Arabs were keen astronomers and navigators, giving us the nautical rank of admiral (from 'Amir al Bahr', ruler of the sea). But Nicolai contends the accuracy of the portolans transcends the Arabs' navigational ability of the time. And what we know of Roman and Greek scientific knowledge, for that matter.

“Perhaps we should re-evaluate what we think was the state of science in Antiquity”, says Nicolai. “As long as this doesn't generate any speculation on so-called lost civilisations. As far as these portolans are concerned, we'll just have to think our way back step by step”.

All the way to the alien spaceship that left behind the first portolan maps, of course.

Many thanks to Robert Capiot, for sending in this review (in Dutch) of the dissertation in question. Short English description found here on Utrecht University's homepage.