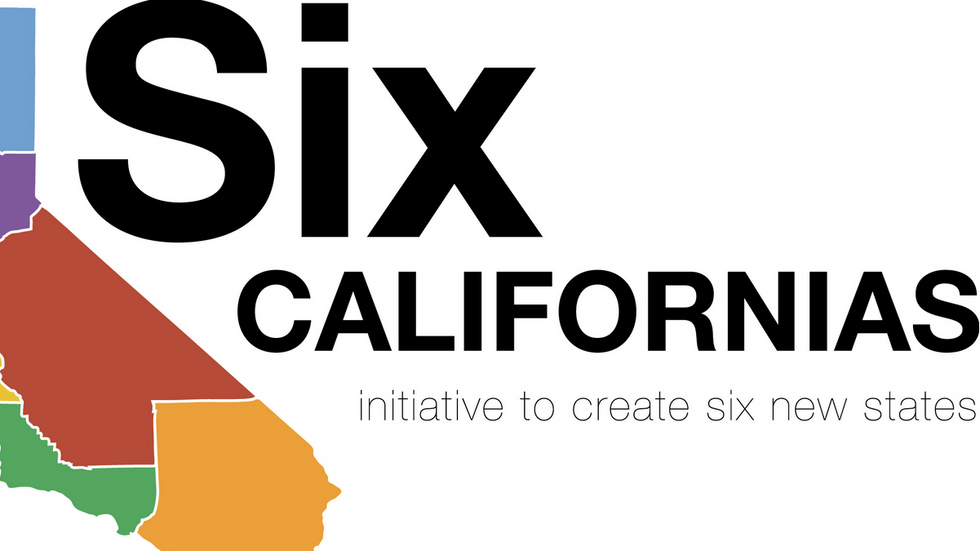 The best argument against German Unification came from French writer François Mauriac: “J'aime tellement l'Allemagne que je préfère qu'il y en ait deux”. It takes an American to propel that backhanded compliment to the next level. Venture capitalist Tim Draper loves his home state of California so much that he'd prefer not two but six of them. He will explain why and how at a press conference scheduled today for 3pm (PST).

California is by far the most populous state of the U.S. The 26 million Texans are a distant second to California's 38 million. In other respects as well, the Golden State compares better to other top countries than other top states.

In area, California is 20% larger than Germany. With its population just under half of Germany's and its $2-trillion economy almost at two-thirds, California on its own would have the world's 9th-highest GDP (Germany is 4th). Why would anyone want to replace that golden-egg-laying goose with half a dozen less remarkable goslings?

In Mr. Draper's words, because California as a single unit has become too expensive and too ungovernable: “We now spend the most [of all states on education and prisons] and we get the least in return: […] We're 46th in education […] We are among the highest recidivism rates. […] There have been some good people running California […] so it must be systemic”.

To Mr. Draper, who made his fortune investing in Hotmail and Skype (and may make more money off his backing for Tesla and SpaceX), the state of California suffers from a structural systems failure. Its regional divergences are simply too big: “People down south are very concerned with things like immigration law and the people way up north are frustrated by taxation without representation. And the people in coastal California are frustrated because of water rights. And the people in Silicon Valley are frustrated because the government doesn’t keep up with technology. And in Los Angeles, their issues revolve around copyright law. Each region has its own interest, and I think California is ungovernable because they can’t balance all those interests”, he told TIME Magazine.

In his vision, smaller states would not only better reflect the differences that already divide California into distinct cultural and economic ecosystems, they would also be closer to their citizens per se by the simple fact of being smaller.

Perhaps unwittingly, the venture capitalist thus reflects the philosophy of Leopold Kohr, the Austrian anarchist and environmentalist thinker who coined the phrase Small is beautiful. Kohr believed that “[t]here seems only one cause behind all forms of social misery: bigness […] The answer: not union but division.” To rid Europe of its centuries-old imbalances of power, he proposed a continent composed of small, rectangular states modelled on the US (see #18).

Draper's subdivisions are a repetition of Kohr's tought experiment. His 'Six Californias' would be:

Paradoxically, the late great state of California would be better represented in Washington after its dismemberment than it is now. As it is, close to 40 million Californians send only 2 Senators to DC, while roughly the same number of Americans – those in the 21 least populous states – get 42 out of 100 Senators. After the split, the 6 mini-Californias together would send 12 Senators to the Hill, out of a new grand total of 110.

A few days ago, Mr. Draper's proposal passed the first hurdle: the California Secretary of State greenlighted the petition drive that will put the question onto the next state-wide ballot in November. That is: if the campaign can gather just over 807,000 signatures by July 18.

It's not the first time that California has been subjected to divisionism. After the Mexican Cession of 1848, the pro-slavery faction in Congress campaigned for a slave-holding state of South California, below the so-called Missouri Compromise Line at the 36°30′ parallel north. That line marked the maximum northern extent of slavery in the previously unorganised western territories. Eventually, under the Compromise of 1850, California acceded to the Union as free state in its present borders.

It took only a few years of statehood for the first home-grown subdivision proposals to surface. In 1854, the State Assembly debated splitting off a northern state of Shasta, and a southern one called Colorado (before that name became attached to another state).

The 1859 Pico Act proposed the Tehachapi Mountains, north of Los Angeles, as the natural border between a northern and a southern California. That idea evaporated in the anti-secessionist sentiment taking hold of California at the outbreak of the Civil War.

In 1941, frustration in northern California, and a regional affinity with southern Oregon, led to the half-serious secession of the State of Jefferson on either side of the state border. The frustration was old, and occasionally still resurfaces; but that secession too was badly timed: one day later, Japan attacked Pearl Harbor, and Jefferson was swept away in a wave of All-American patriotism (see #458).

In 1965, the Tehachapis, a transverse range closing off the San Joaquin Valley in the north from the Mojave Desert in the south, were again mooted as a border. The proposal to detach California's 7 southern counties from the other 51 passed in the California Senate by 27 votes to 12, but died in the State Assembly.

In 1992, a proposal to allow a referendum on a partition in North, Central and South California passed in the State Assembly, but stumbled in the State Senate.

The subject of subdivision is regularly rehashed by pundits and politicians alike, motivated by the three great political fault lines that plague any state of a certain size: conservative versus liberal, rural versus urban, and the rivalry among urban centres themselves (i.e. San Francisco vs. Los Angeles).

The straight line marking the northern borders of San Luis Obispo, Kern and San Bernardino Counties (west to east) is often taken as the unofficial border between northern and southern California.

Proposals historically crystallise along a north-south divide, but occasionally also suggest separating coastal (urban, liberal) California from the more rural and conservative hinterland. As neatly demonstrated by the recent suggestion to create a giant inland state of Reagan, covering most of southern California minus the urban coastal strip, those ideas usually come from conservatives, frustrated by the state-level dominance of 'Left Coast' liberals.

So, rather than radical and innovative, Mr. Draper's proposal is but the latest in a long tradition of divisionist proposals even older than the state itself. What is exceptional, is the number of states he proposes.A map from the San Jose Mercury News, showing county lines and major cities overlaid by the proposed new borders.

It not only allows the urban centres on the coast and the rural hinterland to pursue their own interests, unfettered by each other's opposing views, the proposal also takes on board regional differences, between San Francisco and Los Angeles on the one hand, and between the more libertarian Jeffersonites and the more conservative state to their south.

Even if Mr. Draper's proposal gets on the ballot in November, is approved by the Californian electorate and its state representatives, the question of whether it or any other state can legally initiate its subdivision in more states, is subject not just to Congressional approval, but to constitutional validity.

Famously, Texas reserved the right to do something very similar to what Mr. Draper proposes (see #537 for a post on Texas divisionism), but even that right is subject to legalistic challenges. The only example of a US state splitting is the secession of West Virginia from Virginia, on the eve of the Civil War – a desperate measure for desperate times (see #353).

Also, there is the slight possibility that Mr. Draper has other priorities besides good governance for all of Califoria(s). For one thing: is copyright really the main worry of Angelenos? Some critics have suggested that the real focus of his attention is Silicon Valley, which he wants to liberate from the encumbering legislation imposed by the state government by providing it with a state government of its own, which would be much more sympathetic to the aspirations and requirements of the tech industry.

Still, the venture capitalist insists his plan isn't a silly con. He not only predicts success, but also imitation of his scheme: “My guess is that [if we are successful,] New York will create three [new states] and Texas will create five. We might end up with a total of 60 states”.

Many thanks to J.B. Post for alerting me to the map, found on Mr. Draper's brand new (and as yet contentless) website www.sixcalifornias.info, which promises to livestream his aforementioned press conference later today.