In 1811, the Russian merchant and explorer Yakov Sannikov reported seeing a ‘bluish fog’ to the northeast of the New Siberian Islands. In 1886 and 1893, fellow Russian explorer Eduard Toll also sighted what many by then presumed to be an as yet undiscovered island, provisionally named ‘Sannikov Land’. Intensive searches couldn’t locate it, but Sannikov Land appeared on maps well into the first half of the 20th century.

Only then could scientists prove beyond doubt that Sannikov Land did not exist. In fact, it might be considered something of a modern version of Frisland, the ephemeral isle in the North Atlantic concocted several centuries ago by Venetians, appearing on maps for many years afterwards (see #62).

And yet, some argued, Sannikov Land might have existed at some point in the past. It could have been an island composed of fossilised ice or permafrost, subsequently destroyed by marine activity. This theory is not given much credence. 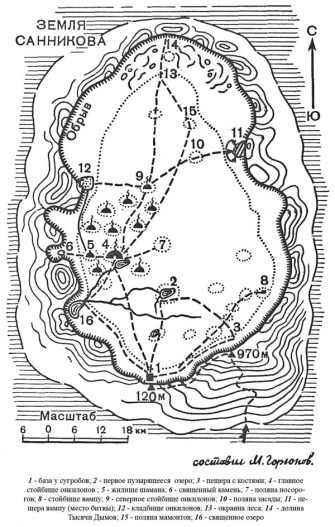 Sannikov Land did prove fertile breeding ground for Russian SF-writer Vladimir Obruchev, who in 1926 wrote an eponymous novel in which the island is the last escape for a tribe of Yuit (Siberian Eskimo) pushed away from the mainland by more recently-arrived tribes. In Obruchev’s story, the island is heated by a volcano, hosts mammoths and a tribe of Neanderthals called Vampoo, and ultimately is destroyed by an eruption of the volcano.  In 1973, ‘The Sannikov Land’ was the title of a Soviet SF movie.

This Russian-language map, taken from the Alison Bridge website (an online allohistory game), shows the presumed location of Sannikov Land (indicated as Zemlya Sannikova in Cyrillic script) to the north of the New Siberian Islands, in the upper right hand side of the map. In between lies Bennett Island.