This canvas by artist Kim Dingle doesn’t look like a map, more like a herd of cows. But actually it’s a collection of maps. The artist asked teen-aged school kids in Las Vegas to draw their country in the shape they thought it had. 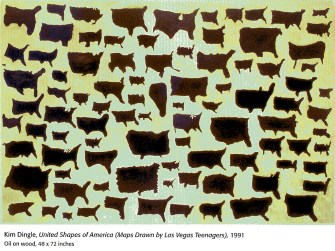