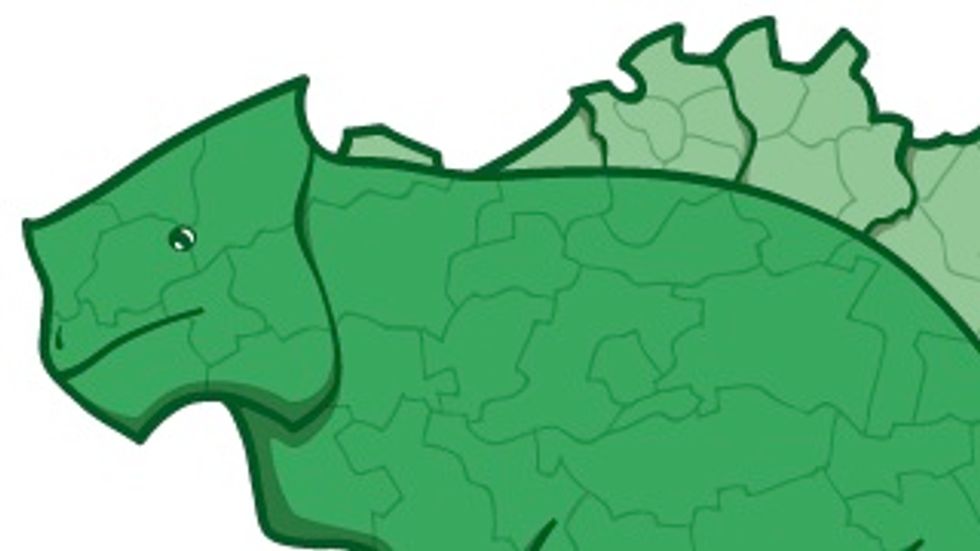 It's a good season for subterfuge. While the rest of the world is watching Syria - or, more precisely, the omnishambles following Obama's "red line" in the Syrian sand - Europe has quietly, but quite drastically been taken over by Belgium.

This map, published 9 September 2013, shows a continent henceforth dominated by a country formerly ridiculed as one of its smallest, most-invaded states [1].

Ah, plucky little Belgium [2]! Still plucky, but not so little anymore. Its head [3] remains attached to the continental shores of the North Sea, but its body has ballooned to cover much of Europe.

Belgium has nibbled at the Netherlands and France, but wolfed down most of Germany and Poland (which seem to have merged with each other and Denmark, by the way), eaten away at Switzerland and Italy, devoured all of Luxembourg, Austria, Hungary and consumed most of former Yugoslavia.

Arlon, Belgium's southernmost provincial capital, is no longer wedged between Luxembourg and France, but is just settling in to its new surroundings [4] in Macedonia, near Bulgaria and Greece.

The Battle of the Bulge, which famously took place just north of Arlon, would now be fought on lands formerly known as Transylvania. Strangely, the Czech Republic and Slovakia have not been absorbed by the Belgian superstate, but pushed further to the east, between what looks like Ukraine or Belarus and what might be Moldova.

Perhaps we should have seen the Belgian colossus coming. After all, the sprout-eaters [5] had already positioned one of theirs to be President of Europe. Unassuming like most of his countrymen [6], Herman Van Rompuy had quietly been preparing the Belgianisation [7] of Europe ever since his appointment to the presidency of the European Council [8] in 2009.

So what will happen next? After the triumphant Belgians have recovered from partying like its mille neuf-cent nonante-neuf [9], they will wake up in a country that is even more central and essential [10] to Europe. With the rest of the European Union effectively Belgian satellite states [11], it will be fairly easy to use Brussels - conveniently already the capital of both Belgium and Europe - to Belgianise the rest of the Union.

A frietkot [12] on every town square! Hundreds of fruity and/or heavy beers in every bar! Mussels in every restaurant [13]! Mayonnaise on every dish!

And that's just for starters. The main course:

Two official languages added to every country unlucky enough to have only one. A thirteenth month of wages added to everybody's pay packet. A Day of the Belgian Monarchy added to each country's holiday calendar. In exchange, the new crowned Belgian king Philippe I [14] would require the allegiance of his new subjects. If they object, word is he'll just throw in another holiday.

Not bad for a country that has been given up for dead more times than Nelson Mandela. Founded in the early 19th century after kicking out the French, then the Dutch, Belgium has proved more cohesive than many outside observers had predicted. But with the economic crisis exacerbating the strife between Flemings and Walloons, that split along linguistic lines might still happen.

Yet another save for Belgium might come in the unlikely guise of its national football [15] team. Most sports commentators agree that the current crop of players for the Belgian national team is of exceptional quality, and many even predict a fabulous run for the Red Devils in next year's World Cup in Brazil.

That would certainly rekindle the fading embers of Belgian nationalism. In fact, this map of Greater Belgium was meant to illustrate national pride at defeating Scotland 0-2 in Edinburgh the day before. Imagine how big Belgium would be if, perchance, it were to win the World Cup next year…

This map, by Kroll, was first published in Le Soir. Here a page of his cartoons for the paper. More work by one of Belgium's most talented cartoonists on his own website.

[1] Full disclosure: the author is a citizen (though not a resident) of Europe's new superpower.↩

[2] The phrase used by British newspapers in the autumn of 1914 to describe neutral Belgium's principled but hopeless resistance against the German invasion.↩

[3] Its dinosaur head, to be exact. (Found at Geographer At Large).↩

[4] Reminiscent of a similar ploy to extend the Netherlands into the Balkans. More on that in #525.↩

[5] As in Brussels sprouts. Food-mad Belgians probably deserve a gastronomical nickname, but 'chocolate-munchers' just doesn't have the necessary put-down factor.↩

[6] Can you name five famous Belgians? Fictional ones like Tintin, Hercule Poirot and Leopold II don't count. Of course you can't. But it's not that there aren't any. It's just that you've never heard of them. Here's a Top 10 from the page famousbelgians.net - apparently, there are so many Famous Belgians they had to build a website to contain them all.↩

[7] You laugh at the very word, and this article is very much tongue in cheek. Yet others take the threat of Belgianisation seriously - even write whole books about it.↩

[8] The European Council consists of all EU heads of state or government, with its members presiding in rotation until they elected Van Rompuy (then prime minister of Belgium) to be its first permanent president. He was re-elected for a second and final two-and-a-half year term, which will expire on 30 November 2014.↩

[9] That's 1999 in Belgian French, which makes more sense than the French French version: mille neuf-cent quatre-vingt-dix-neuf. To give every official language in Belgium its due, in Dutch it would be negentien negenennegentig, while the German-speaking Belgians would party like it's neunzehnhundertneunundneunzig.↩

[10] Better in French: incontournable, literally 'impossible to bypass'. An elemental word in Belgian political discourse, and soon across Europe.↩

[11] Some would say: Replace Belgium with Germany, and you have a good description of the EU's current balance of power.↩

[12] A kiosk selling Belgian fries (erroneously called French fries in the English-speaking world) and related condiments and snacks. Frietkot or frituur are the preferred terms in Dutch, friture or friterie in French.↩

[14] One of the few people in the world whose name is multilingual. He is known as Philippe in the French-speaking south of Belgium, and Filip in the Dutch-speaking north. And the German-speakers? In a great example of a classic Belgian compromise, they can choose between both.↩