The discovery of America was an Italian enterprise, but not to the credit of a Genoan named Columbus. In the 14th century, Venetian brothers Nicolo and Antonio Zeno sailed west on the Northern Atlantic, discovering places they called Frisland and Icaria (two islands near Greenland), Estotiland (on the North American mainland) and Drogio (an island close to the mainland, possibly Nova Scotia).

Or so it says in De I Commentarii del Viaggio, a 16th century account of their travels by Nicolo Zeno, one of their descendants. This latter-day Zeno claimed to have found a manuscript and a map, both made by his ancestors, in his proverbial attic. Nicolo the Younger had it published in 1558. At the time, it was generally believed to be a true account. A second version of the map was issued by fellow Venetian Giordano Ruscelli in 1561.

In 1569, Gerard Mercator copied the Zeno map into his influential World Map. Abraham Ortelius did the same for his renowned map of the Northern Atlantic in 1573.In 1595, Mercator included Frisland (not to be confused with Friesland, which does exist on the North Sea coast of the Netherlands and Germany) in a separate inset on his 1595 map of the North Pole. Thus Frisland, and the other fanciful lands fabricated by the 16th century Zeno (most likely), came to be known as ‘fact’, and were copied by other cartographers, often with variations on the name such as Fixland, Freezeland or Frischlant. Only much later did it become clear they were imaginary.

But not before causing some real-world confusion for discoverers such as Martin Frobisher, who in 1576 reported seeing a ‘high and rugged land’, which according to Mercator’s map ought to be Frisland. Frobisher claimed Frisland for England, not realising he probably saw the coast of Greenland.

The confusion continued when he explored Baffin Island – which Frobisher thought was Greenland. Accordingly, Frobisher’s Strait (which in fact is a bay) for many years was situated at the tip of Greenland instead of Baffin Island. Cartographers continued to include Frisland on maps of the North Atlantic as late as the 18th century. As imaginary places go, Frisland had quite some staying power – probably because it was confused with Greenland and/or the Faroer Islands.The question remains: who did the confusing? The older Zenos, their descendant, later cartographers and explorers? Or some of them? Or all of them? 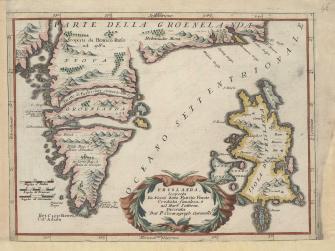 This map was made around 1693 by Vincenzo Maria Coronelli and situates Frisland to the east of Greenland.