“A cucumber should be well sliced, and dressed with pepper and vinegar, and then thrown out, as good for nothing”, said Samuel Johnson [1]. The lexicographer’s wit is as piquant as the cucumber’s taste is bland. The humble fruit [2] is about 95% water and not terribly high in nutrients, so perhaps its detractors have a point.

But as a refreshing snack, and a popular ingredient in salads, cucumbers have their fans too. Praise, or at least culinary nostalgia, comes from no less authoritative a source than the Bible: “We remember the fish, which we did eat in Egypt freely; the cucumbers, and the melons, and the leeks, and the onions, and the garlic” [3].

Whether loved or loathed, the Cucumis sativus[4] certainly has pedigree. It was one of the first plants domesticated by humankind. Originally ‘tamed’ in India at least 3,000 years ago, its cultivation spread to China during the Han dynasty and to the west early enough to be mentioned in Mesopotamian writings.

The Greeks are credited with introducing cucumbers to the rest of Europe. One of the cucumber’s all-time biggest fans must have been the Roman emperor Tiberius. As attested in Pliny the Elder’s Natural History, Tiberius ordered the use of wheeled cultivation beds to expose growing cucumbers to as much sun as possible, and to enable those beds to move into primitive greenhouses in winter. This allowed the emperor to eat cucumbers every day of the year. From Italy, they spread throughout the rest of Europe. At the turn of the 9th century [5], cucumbers were growing as far north as the imperial gardens of Charlemagne’s capital Aachen.

Much later, Columbus introduced them to America, planting cucumbers on Hispaniola in 1494. They proved so popular with Native Americans that they spread faster than European exploration of the New World [6]. During the American Civil War, general Ulysses S. Grant was so fond of cucumbers that sometimes he ate nothing else: “The general made rather a singular meal preparatory to so exhausting a day as that which was to follow. He took a cucumber, sliced it, poured some vinegar over it, and partook of nothing else except a cup of strong coffee”. [7] An interesting modification of Dr. Johnson’s recipe.

Cucumbers, related tot pumpkins, melons and other squashes, are not distinct from pickles and gherkins; these are just names for cucumbers that have been preserved in vinegar, brine or other solutions. Other foodstuffs are similarly conserved – see pickled herrings, pickled onions, or kimchi, the varieties of pickled vegetables typical for Korean cuisine. A gherkin is nothing but a pickled cucumber of a very specific, shorter type, e.g. the West Indian Burr Gherkin.

A final bit of cucumber trivia: Cucumber is one of the rarest of American surnames. There are about 20 individual listings in the US White Pages for people named Cucumber [10], all but one in the western part of North Carolina [11]. Curiously, a Mr. David Cucumber lives on Dave Cucumber Road. The only Cucumber listed outside of Appalachia is a Mr. Cucumber in Rhode Island, who lives on Cucumber Hill Road. 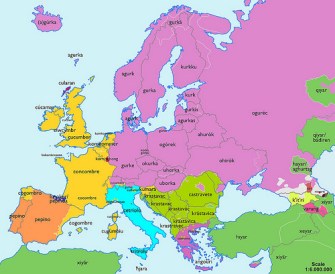 The cucumber clearly has a bunch of fascinating stories to tell – and one of them involves this rather intriguing isogloss [12] map. The map shows the word for ‘cucumber’ in the diverse languages of Europe and surrounding areas. It shows how the cucumber has managed to achieve territorial homogeneity, even across language borders.

Out of all the potential for permutations, four large, and remarkably uniform blocks have emerged. The most striking zone is the one coloured pink, including many Germanic and Slavic variations of cucumber: ranging from Gurke in German to ogurec in Russian. Cognate words in unrelated languages are kurkku in Finnish, and uborka in Hungarian.

Remarkably, the linguistically diverse countries of the Balkan share a similar word for cucumber: castravete in Romanian [13] (descended from Latin), krastavac in Serbian (and similar words in the other Slavic languages of the region), and kastravec in Albanian (a language with no close relatives). The only exceptions are Greece (angouri – a pink exclave) and Slovenia (kumara).

In this, as in other matters, Slovenia shows itself to be more oriented towards western Europe [14] than the rest of the Balkan. Cucumerally [15] speaking, Slovenia is an isolated part of a larger zone, dominated by the English cucumber, and the French concombre. Smaller variants are the Dutch komkommer, the Welsh ciwcymbr, the Galician cogombro, the Catalan cogombre and the Romansh cucumera [16]among others.

In a crescent surrounding the European mainland, Arabic- and Turkish-speaking countries favour variations of the word xiyar, with qiyar all the way up in Tatarstan [17].

What remains, are small islands of peculiar names given to the cucumber: pepino in most of the Iberian peninsula, cetriolo in most of Italy, cularan in the Hebrides, kornischong in Luxembourg, k’it’ri in Georgia, varung in Armenia. The Chechens call it närs, while the Basque have the option of calling it luzoker.

What are we to conclude from this Cucumber Map of Europe? Does the distribution of the linguistic variants for ‘cucumber’ correspond to any kind of cultural, historical or other border? Well – it did remind me of a map I saw in the end papers of the Robert Harris novel Fatherland: of a Europe where Germany had won World War Two. 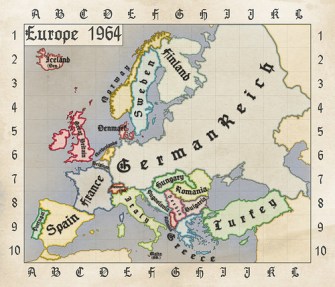 The zone dominated by the German/Slavic cognates for cucumber corresponds somewhat to the Greater German Reich in Harris’s alternate 1964: from the Benelux border deep into Russia, with an independence of sorts for Italy, France, and the Balkan countries (among others).

So does this mean anything? Are cucumbers a sinister crop with a hidden agenda, garden-variety shock troops of a New Plant Order? Surely not. From one map to the next, isogloss lines are as mutable as the shape of clouds. 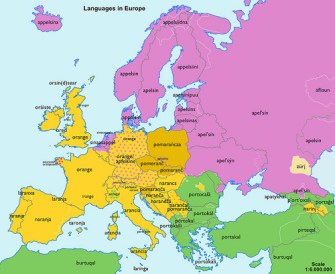 Take for instance this map, taken from the same series, depicting the words used to describe an orange. Gone is the Greater Cucumber Co-Prosperity Sphere, to be replaced by a Russo-Scandinavian-Dutch alliance against a European Union of Orangists. All the while, the Sublime Portokal[18] rules North Africa, Turkey and the eastern half of the Balkans, otherwise so united under the krastavac.

Trivial, amusing, strange. Exactly the kind of map for to get stuck into during a slow news cycle. Or, as they call it throughout much of Europe: cucumber time [19].

Many thanks to Mikołaj Kirschke for sending in this map, posted by his friend Eglė Markevičiūtė on Facebook. The Fatherland map made by Kristo1594 and found here on his DeviantArt page, where you can find some more interesting maps by his hand. The orange map found here on imgur.

[2] Yes, the cucumber is a fruit, in spite of of its frequent use in salads. Botanists define a fruit as that part of the plant that develops from a flower, and contains the plant’s seeds. All other parts of the plant, be they leaves, roots, stems or even flower buds, are vegetables. ↩

[3] In Numbers 11:5, when the Israelites are wandering though the desert on an empty stomach. ↩

[4] Latin for ‘sown’, the adjectival part of this taxonomic description is used for crops that have been cultivated for domestic use. Compare Cannabis sativa.↩

[6] In 1535, Jacques Cartier found “very great cucumbers” grown on the site of what is now Montréal. ↩

[7] As related by general Horace Porter, in his memoir Campaigning with Grant. ↩

[9] All figures from the US Department of Agriculture, taken here from foodreference. ↩

[10] 34 listings in total on Switchboard, but clearly including a number of duplicates. ↩

[11] With a remarkable concentration in and around Cherokee, the major town in Qualla Boundary, the land trust (rather than a reservation) that is the last remnant of the original Cherokee homeland still controlled by part of the tribe (i.e. the Eastern Band of the Cherokee). See also #206. ↩

[12] Isogloss maps show the geographic distribution of differences in pronunciation, word meaning, word use, or other linguistic features. The term was coined in reference to the contour lines on weather charts. But whereas these isobars connect points of equal pressure, isoglosses merely separate areas of different language. It has therefore been suggested they be called heteroglosses instead. ↩

[13] The pink island in the middle of Romania is a Hungarian-majority area of Transylvania. ↩

[14] Slovenia was the first former Yugoslav republic to become an EU member state, in 2004. Croatia will be the second one to join, on 1 July of this year. The other ex-Yugoslav states, plus Albania, are recognised as candidates or potential candidates. ↩

[15] The adjectival form of the Latin word cucumis (gen. cucumeris), perhaps used here for the first time. And possibly the last. ↩

[16] A Latin-based language, Romansh is the smallest of the four official languages in Switzerland, spoken by 35,000-60,000 people in the canton Graubünden. It is part of the small Rhaetian (or Rhaeto-Romance) language family, with Ladin and Friulian in northern Italy.  ↩

[17] Tatarstan, now a constituent republic of the Russian Federation, is the world’s northernmost majority-muslim republic. ↩

[18] The Sublime Porte was used to describe the Ottoman Empire; it referred to the gate that gave access to the principal offices of government in Istanbul. Compare: Number Ten for the office of the British Prime Minister (located at 10 Downing Street). ↩

[19] The English silly season, called serpiente de verano (‘summer snake’) in Spanish, is linked to cucumbers in many European languages, due to the fact that the period of low news intensity usually falls in high summer, supposedly the best season to harvest cucumbers. Some examples: okurková sezóna (Czech), agurketid (Danish), komkommertijd (Dutch), Sauregurkenzeit (German), Agurkų sezonas (Lithuanian), Sezon ogórkowy (Polish), Uborkaszezon (Hungarian). Americans – though none I have ever come across – apparently refer to gooseberry time.  ↩

The Impossible Paradox of Life and Death

When I met my last spiritual teacher, the revered HWL Poonja, in 1986, he taught me how to be free. He was such a powerful teacher that within minutes of […]