It was this map of Greenland that triggered this post. I say map, but I mean hole in a drainpipe. 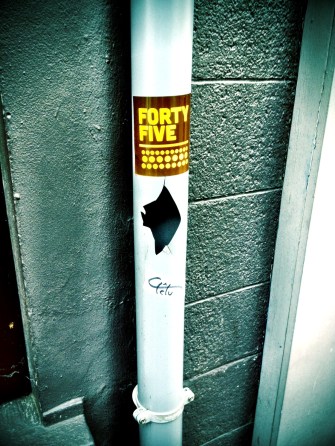 This picture was sent in by Ruland Kolen, who was struck by this hole’s accidental resemblance to the shape of the world’s largest island: “Both Greenland and this hole look like a lion’s head facing west, with a bulge near Thule [1] in the northwest as its mouth and the coastline to the north and east its sweeping mane.”

It reminded me that, languishing in a folder, were a number of other images of this type of accidental cartography [2]. It’s been treated a few times before on Strange Maps [3], but the subject seems inexhaustible. By now, certain patterns have emerged:

For your consideration, I hereby empty that folder marked ‘Accidental Cartography’.

“Not sure if you’re still collecting cartocacoethes”, says James Nicholls (Yes, James!), “but I stumbled across this one of the Hawai’ian Islands at the bus stop opposite my apartment some time back”. 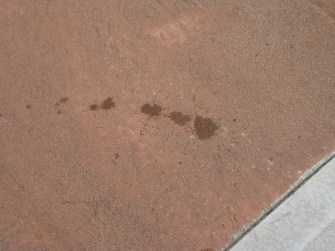 The sequence of drops does indeed resemble the string of islands that make up the US state of Hawai’i. The biggest blob to the right is easily identifiable with the archipelago’s Big Island, while to its west a single spot covers the next four islands (Maui, Moloka’i, Lana’i and Kalo’olawe), and after that a single blob coincides with O’ahu. The next two are Kaua’i and Ni’ihau. A few indistinct drips further west could be seen to represent the ever smaller string of Northwestern (or Leeward) Islands. All in all a remarkably good fit.

Another Hawai’i was sent in by Mike Beidler: “I was about to brush my teeth when I felt compelled to snap [this photo]. Enjoy!” 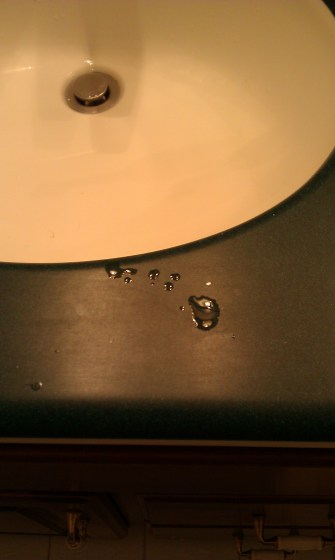 This Hawai’i is perhaps less serendipitously precise, but still has Big Island leading a host of smaller ones, like a mother duck swimming ahead of its ducklings. And again it’s a string of water drops…

Here’s another drop of water, sent in by Justin Goddard. Can you see what it is? 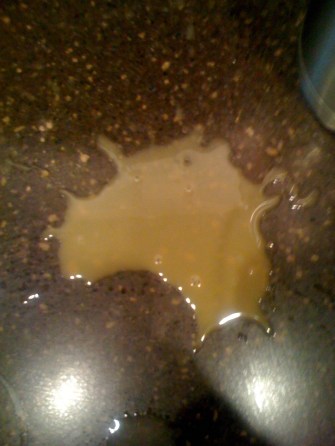 Australia, of course! At least with a little stretch of the imagination, and an eye for accidental cartography.

And here’s another Australia, sent in by David Cohen, who resides in Perth, Western Australia. 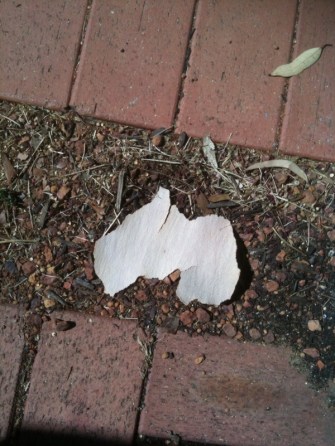 “[This was taken] by our front gate and is bark from a gum tree. I liked this so much I used it as my Facebook profile pic for a while. Not an exact Oz – but near enough?”

Near enough if you have that eye for accidental cartography. Like Thorbjørn Thaarup has. He was happily doing the washing up, “or somewhat happily at least […] and suddenly Africa pops up on the half-soaked chopping board. I instantly thought of you and took a photo. I admit that it’s only northern and western Africa that looks right – the eastern half is hidden beneath a gigantic cloud bank”. 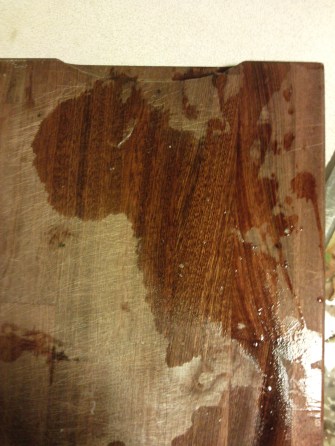 The roundness of the northwestern coast here is remarkable, and reminiscent of the reverse of the East Anglian coast in England’s southeast. But in combination with the Bight of Bonny [5] and the straight-ish line south to the Cape of Good Hope, this is unmistakably Africa.

It’s a small step from the chopping board to the frying pan. 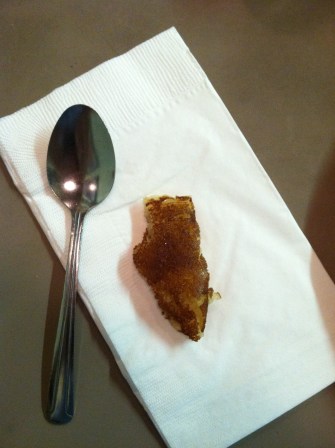 “Eating sourdough pancakes at Paul’s Pancake Parlour in Missoula, Montana, I noticed as I cut my pancake that this piece came out looking like a very good map of Illinois! Spoon included for scale”, writes Wendell Albright.

And yet another map-infused pancake turned up in Sweden: 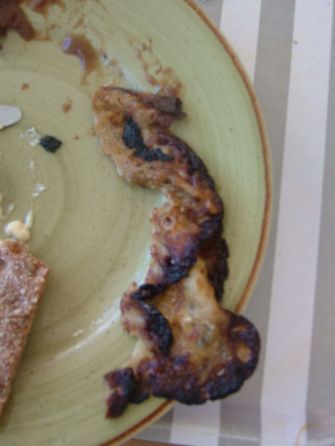 “A friend of mine shaped [this pancake] when we were lunching in Soderham (Sweden)”, says Pedro Damião from Portugal. “[a]s I am a geography teacher, it seemed to me a good shape to start a lesson about Europe, so I took [a] picture. The artist is Federica Gemmani (Italy)”.

I’m sure Mr. Damião will be very strict with whomever doesn’t get this in the first 5 seconds. Time’s up! Pencils down! It’s Great Britain!

Would you like some coffee with that pancake, Mr. Damião? Watch out, though – you never know what you might find in your cup. “I found this image of Africa at the bottom of an espresso I bought and drank at Pt. Reyes Station, California”, says William Most. 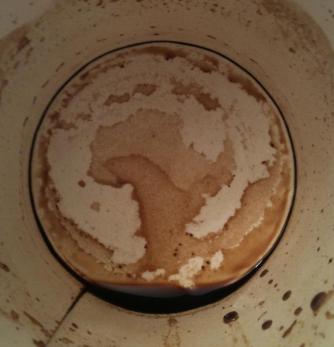 The shape is certainly there, up to and including the Horn of Africa in the east. The colouring is superb, and makes the liberty taken with geography believable. Unless I’m much mistaken, on some Ptolemaic maps Africa is indeed shown to be connected with Asia via a land bridge in the south.

Coffee is a powerful medium for accidental cartography, confirms Marina Ialovic: “Here’s [a] strange map of Italy in a cup of Turkish coffee”. 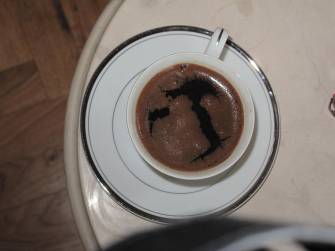 The boot and heel are there (plus a horse spur, which shouldn’t), and the north of Italy  tapers out sort of like the real one does. But no Sicily, Sardinia, not even a Corsica [6] – just a strange spot of land that might be southern France torn off Italy, or Catalonia making a run for it, away from Spain.

Dave Collins has an interesting question: “Ever wonder why all the major land masses in the world seem to drip toward the South?” By way of answer, he sends in a picture of his glass of Rickards. “Who’da thunk I could see the world from the comfort of a barstool?” 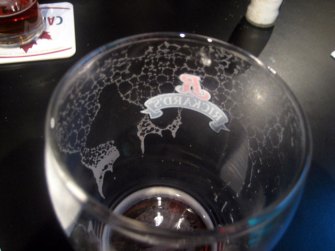 “North and South America are quite [well-represented]. At first, that was all I saw, but the more I looked, the more I found. Europe and Asia are there (if conjoined with the Americas). Africa is looking a little anemic. India and all of South East Asia, including Malaysia and Sumatra, are there.”

Another ‘mug shot’ was sent in by Bill Given, the mayor of Grande Prairie, Alberta (Canada). “This morning it struck me that the stain left over in my coffee mug from yesterday is a pretty decent map of Asia… Japan kinda didn’t make the cut though.” 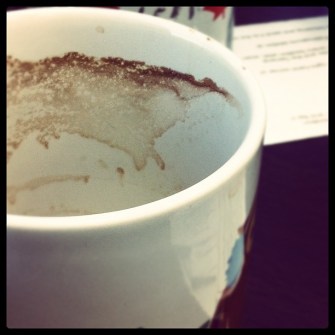 “Interestingly, the mug is from the Vancouver Olympics and features the mascots Sumi, Quatchi & Miga who would seem to have a significant Asian influence. There you go – maps in all kinds of places.”

You don’t have to be drinking your coffee, or eating pancakes, to see strange maps. Take Tom Murray’s example, who was minding his own business in the front room of his house in Blackpool (England). 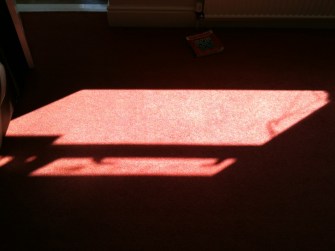 “I took this photo of some light coming through the window in my front room as I thought it had an uncanny resemblance to a map of Tennessee”, says Tom. And so would we.

But it gets weirder. This might possibly the coolest example of unintended cartography we’ve yet hosted here. 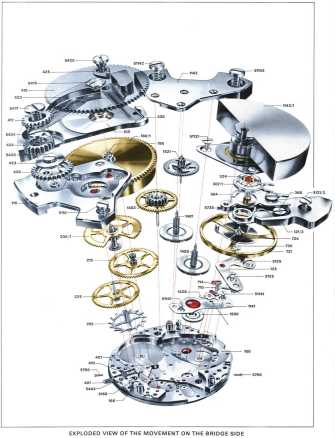 Here’s Adam Muller, who admits to seeing accidental cartography everywhere – and thanks this blog for it: “This sample combines my love of maps with my affection for watches.  It’s an exploded diagram of a “microrotor”–an automatic winding mechanism in a TAG-Heuer watch from the 1970’s.”

“How cool is this Microrotor-Africa!  As an amateur mechanic, I can only marvel at the ingenuity the microrotor itself, and as a lover of maps I wish I could give the artist a high-five for arranging the diagram in the shape of the African continent–complete with the Somali Peninsula/Horn of Africa!”

Another example, again by Dave Collins: “Can you tell where this snapshot of countryside is just by examining the network of roads and rivers? The majority are densely packed in a chaotic town core while a few extend across the open country to another nearby town, shying away from mountainous areas, and instead meandering around small hillocks and along rivers.” 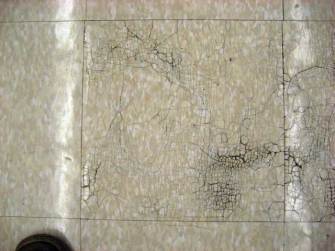 “Give up? You should. This patch of countryside is much smaller than it seems, occupying only one square foot of the tile floor in my local grocery store.’

Many thanks to all who sent in these pictures. Please feel free to send in your own. May many accidental maps cross your path today!

[1] Known to the locals as Qaanaaq – one of a relatively short list of palindromic place names. Others include Wassamassaw (South Carolina, US), Daba Qabad (Somalia), Paraparap (Australia), Ellemelle (Belgium), Idappadi (India), Glenelg (Scotland), Serres (Greece), Kalak (Azerbaijan), Uku and Utu (both in Estonia). A more complete list here. Curiously, the vowel -a- is remarkably dominant. ↩

[2] Sometimes also called cartocacoethes, a Greek word describing the ability to see maps in non-cartographic patterns (or perhaps, in particularly serious cases, the inability not to see them). It is a specific form of pareidolia, also Greek, for finding meaning in patterns where there isn’t any. ↩

[4] Did we already mention the title of Bruce McCall’s book? If so, we’ll repeat it here because it rings o true: All Meat Looks Like South America. ↩

[5] Formerly the Bight of Biafra, until the government of Nigeria decided in 1972 to erase all remnants of the name of that secessionist region even from the maritime map. ↩

[6] Which was never part of Italy, although Italian was the main language until the 19th century. ↩

Brands like BMW, Walmart, and IBM are seeing big wins from the use of gamification in corporate training. Here’s how.
Up Next
Surprising Science

The recent gang-rape and subsequent death of a Delhi woman has highlighted not only the problem of public safety, but the solutions some are seeking to protect themselves.