The Garden of Eden - in China?

Could the unforgiving Taklamakan Desert once have been the location of the Garden of Earthly Delights? 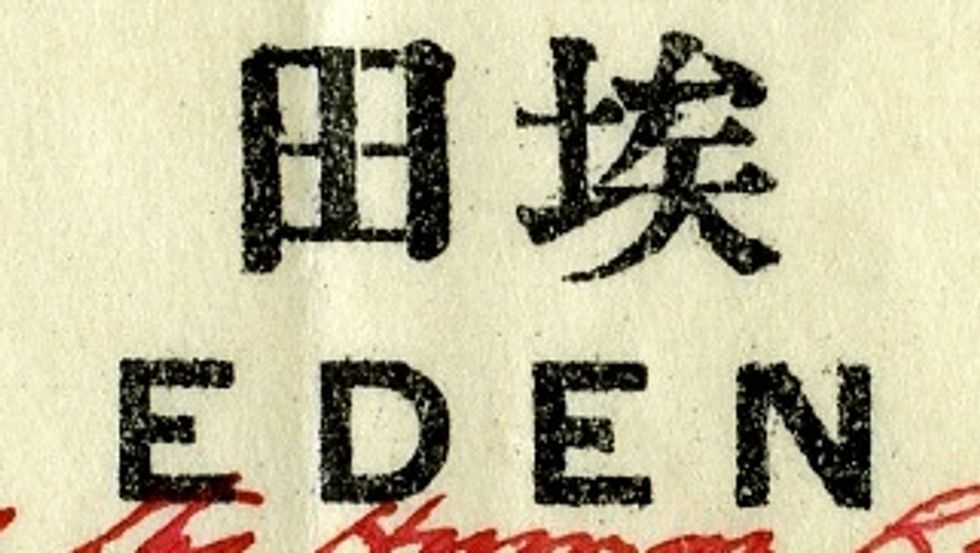 Imagine it’s a long, long time ago. As the legend on the map says: “Before the upheaval of Central Asia. Before the subsidence of the Pacific Continent. Before the change in the position of the Polar regions. Before the Deluge.”

Ah, the Deluge. That gives us a pretty specific time frame. To Biblical literalists, sacred history comes with a very real chronology; the universe was created one weekend about six thousand years ago, the Great Flood is less than four and a half thousand years old [1]. In contrast, those who prefer their world view seasoned with a generous helping of science, will be more inclined towards the hypothesis that it all started with a Big Bang, some 13 billion years ago.

Even without going into the whole Creationism versus Evolutionism debate [2], the massive imbalance in the size of their back stories seems to work in favour of the thesis with the bigger reserves of time. Antiquity suggests validity. It’s much more difficult to argue with the vast aeons at the disposal of the Big Bangers than with the puny millennia of the Adam and Eve crowd. Put another way, the former have more logical explanations for phenomena like past extinctions and climate changes than the latter.

But sacred history does have one big advantage over natural history - it has better stories. In the darwinist reading, the path from past to present was forged by impersonal forces: either big accidents (meteors, climate change) or slow evolutionary changes (frontal lobes, opposable thumbs). The ‘supernatural’ version in the Bible actually is the more ‘humanist’ one: it gives centre stage to Mr and Mrs Sapiens, and explains history as a consequence of the choices they face [3].

For Darwinists, our dog-eat-dog world merely is the successor to a previous, dinosaur-eat-dinosaur incarnation. In science, there is no Garden of Eden. The idea of Eden - that once there was a perfect state of affairs, when truth and happiness were not opposed [4], and virtue as pure as the world was young - is a powerful and attractive one [5], explaining the continued popularity of the sacred version of history, in spite of some obvious logical problems [6].

So imagine it’s a biblically long time ago. It’s the age of innocence, and life is good in the Garden of Eden. But where is this Garden? The hunt for the exact location of humanity’s original home is a fascinating quest, and a centuries-long cartographic conundrum [7]. If they chose to include it on a map, cartographers usually picked a location in the Middle East, that cockpit of hallowed history.

These two maps, however, are quite extraordinarily different. Eden is placed far away from its more usual location in or near Mesopotamia [8] - The Garden is moved East of Eden, to borrow Steinbeck’s title [9].

They are the work of Tse Tsan-tai (1872-1938), a Chinese revolutionary, newspaperman and Christian propagandist. Born in Sydney and baptised James Yee, Tse moved to Hong Kong whence he started agitating for the Qing dynasty on the mainland to be replaced by a democratic republic. The plot failed to come to fruition, and Tse had more success co-founding the South China Morning Post in 1903.

Tse’s outlandish theory was an attempt at proving that at least some Biblical events had taken place in China - and that therefore Christianity was not alien to the Middle Kingdom [10]. The book was meant to dispel the notion that Christianity in China was a tool of foreign powers, at a time when the countries sending the missionaries were the same ones bullying a weak China into granting them coastal concessions [11].

The first map gives a global overview of the Bible-based world history as seen by Tse, and as opposed to others: two black dots represent the usual presumed location of Eden, in what appears to be either Iraq or southeastern Turkey. A red circle represents Tse’s hypothesis. It places Eden in the far west of China, in what was then known as Chinese Turkestan (and now as Xinjiang).

The location picked by Tse corresponds to the description in the Bible, referring to the course of four rivers near the Garden of Eden [12]. Apparently unconnected to the Edenic claim are red lines on the map, that indicate ancient shorelines, and point to a giant sunken continent stretching from Papua New Guinea almost all the way to South America. It remains unexplained what this continent is, and which Bible verse it is based on; but it is reminiscent, shape- and location-wise, to the lost continent of Mu [13].

The map also shows an X in Tse's handwriting, marking a spot in Greenland that is supposed to have been the Antediluvian North Pole, Latitude 75˚, Longitude 40˚. Again, the Biblical foundation and any connection to Eden remain unexplained on the map.

Finally, the colour scheme on the map shows the world as peopled by Noah’s descendants. Biblical tradition holds that the world’s population descends from no more than three men [14] - the sons of Noah: Shem, Ham and Japhet, the forefathers of the Semites (in the Middle East, and on this map, much of Asia and all of America), the Hamites (Africa, Arabia, India) and Japhetites (Europe). The Semitic expansion into Asia provides blood links between China and the Bible.

The second map gives an indication of the geopositional shoehorning Tse applied to the geographical indications in Genesis, identifying India with Havilah [15]. The result is the location of Eden in what appears to be a most unlikely place: an area between the Tarim River and the Kuen Lun Mountains better known today as the Taklamakan Desert. The area, now the world’s second-largest sand desert after the Empty Quarter in Arabia, is one of the most inhospitable places on earth.

But ruined cities buried beneath the sand seem to indicate that the Taklamakan may not always have been as unforgiving as it has been for the last few millennia. In fact, its very name may hold a clue to its climatological past. Often, and erroneously, translated as something like ‘Once you enter, you’ll never make it out’, or ‘Sea of Death’ a more recent etymology suggests the name might actually mean ‘Land of Poplars’ [15].

Could it be that today’s sand desert once really was a garden paradise?

Many thanks to Heather Hausman at Atlas Obscura for informing me of a lecture by Brook Wilensky-Lanford, the author of Paradise Lust: Searching for the Garden of Eden (see footnote 7).

[1] James Ussher, a 17th-century (Anglican) Archbishop of Armagh, famously calculated from hints in the Book of Genesis that Creation started at dusk on Saturday 22 October 4004 BC; he placed the Flood at 2348 BC, resulting in a total of 1656 years for the entirety of the Antediluvian era.

[2] It really isn’t a debate. But that’s a non-debate better held elsewhere.

[3] Albeit always in relation to God, and usually in the sense that they cheese Him off.

[4] The current paradigm holds that knowledge is power, but ignorance is bliss.

[5] In religion as in politics, the lure of the ‘good old days’ is as age-worn and as common as the lament that the world is going to hell in a handbasket.

[6] Where on that limited time scale do you place the dinosaurs?

[7] See ‘Paradise Lust: Searching for the Garden of Eden’ for at both those clues and the eventual locations, with an overview of some of the most crucial attempts at mapping the original location of Eden.

[8] Greek for the Land between the Rivers, i.e. the Tigris and Euphrates. This well-watered land of ancient cultures is now divided between Iraq, and parts of Syria and Turkey.

[9] Who borrowed it from the Bible: And Cain went out from the presence of the LORD, and dwelt in the land of Nod, on the east of Eden. (Genesis, 4:16)

[10] Nestorian Christianity was present in China from the mid-7th century onwards, but was extinct by the year 1000.

[13] The presumed source information for which is Mayan rather than Biblical. See #47.

[14] Curiously, recent advances in genetic biology means that science too now can pinpoint a common ancestor for all mankind - ‘Mitochondrial Eve’.

[15] More commonly identified with locations on the Arabian Peninsula, such as the Hijaz Mountains in western Saudi Arabia, or parts of Yemen.

[16] According to research by Qian Boquan , historian of the Xinjiang Academy of Social Sciences in Urumqi.