Happy 2012! By now, you’re probably still in the earnest stage of your New Year’s resolutions. If one of those is about your determination to cut back on drink, this might not be the best thing to read right now.

Maybe you should bookmark this post for that moment when you again feel like enjoying a drop of something strong. For this map celebrates not just the merely palatable, but rather the positively appetising. Or, as put so emphatically by the Bunk, that suave Baltimore murder police from The Wire: “The taste, Jimmy, the taste!”

This map is a handy guide to Scottish single malt whiskies, plotted on a grid with two sets of variables. Horizontally, from light (left) to rich (right); and vertically, from delicate (bottom) to smoky (top). 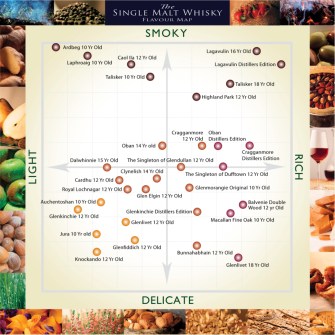 These are the main taste variables in the vast and bewildering universe of uisge beatha [1]. In Scotland alone, over 90 distilleries produce over 2,000 brands of whisky. Many of those are blended; aficionados will prefer the single malt whiskies, i.e. whiskies produced by one single distillery, using only one type of malted grain, and aged in oak casks for at least three years. Even in the strictly defined and regulated category of Scottish single malt whiskies, there are still over 800 varieties [2] – of which only a few are represented here.

“I know that people find whisky confusing – and they often try blended Scotch and get put off whisky for life”, says whisky expert Dave Broom [3]. “They are really missing out […] You need help to find what you like.”

Which is why Broom developed the aforementioned grid, also known as the Whisky Flavour Map. The map allows samplers of single-malt whiskeys to explore taste relations between them, and discover new ones to their liking.

The horizontal axis differentiates lighter from richer flavours. According to Broom, the Glenkinchie 12 (years old), on the lighter end of the spectrum, “had light floral grassy notes”. Clynelish 14, was “more textured, silkier, waxy and unctuous”, so halfway between the Glenkinchie and the Singleton of Dufftown 12, with its “nutty, almondly, dried-fruit flavours”.

The position on the vertical axis is determined by the whisky’s degree of ‘peatiness’. Peat can be used to heat the pot stills in which the damp malt is dried, during which time the smoke gets into the barley – more time, more smoke, more smokiness. A Laphroaig 10, anyone? If less or no peat is used for the fire, the taste will be delicate rather than smoky, like with a Scapa 14.

Many thanks to Michael Castelein for alerting me to the Whisky Flavour Map, which can be downloaded at www.malts.com.

[1] Scottish Gaelic for ‘water of life’, and origin of the word ‘whisky’ (written as whiskey when referring to the Irish or American variant). Similar etymologies underlie Scandinavian akvavit, a grain- or potato-based distillate, flavoured with caraway and other spices, and eau de vie, a fruit brandy.

An independent researcher looks into why there’s such strong opposition to her research.
Up Next
Politics & Current Affairs

Why Economic Growth Is Not Imperative

In our period of economic uncertainty, it may seem wrong to question the growth imperative. But, then again, perhaps this is exactly the occasion to rethink the goals of global economic policy.