The Eurovision Song Contest is a resounding success in at least one respect. Set up as a laboratory of European harmony – musically, audiovisually and politically – its first edition [1] featured a mere 7 participating countries, all Western European. The 57th edition, next May in Azerbaijan, will have 43 countries from all over the continent vying for the top prize, and the honour to host the 2013 edition of the event in their capital city.

Mission accomplished, then. But a chorus of critics – swelling, as the turn of phrase suggests [2] – finds the annual event increasingly tacky and irrelevant. The winner is determined by a tally of national votes, which have less to do with the quality of the songs than with the degree of friendliness between the participating countries.

Most of that criticism comes from the original Eurovision countries. Sore losers? Perhaps. Western Europe is increasingly sidelined by the east, which by way of its voting patterns has regained some of its former reputation as an ‘Eastern Bloc’.

So next year’s contest is organised by last year’s winner, Azerbaijan. The Transcaucasian country, which by some definitions is Asian rather than European, is indeed rather eccentric – at least from a geographic point of view. Its capital Baku is Europe’s easternmost, and closer to Kathmandu and Addis Abeba than to Paris or Berlin. 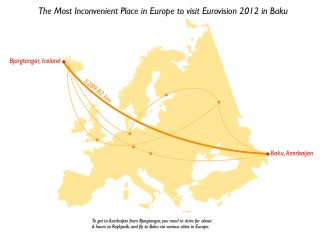 Most participating countries will have to send their delegations much farther afield than usual, and none more so than Iceland – itself also a European eccentric, geographically and politically. This map shows how far the most distant fans of the Eurovision Song Contest would need to travel to see their contestants perform.

Those fans would live in Bjargtangar, in the extreme west of Iceland. Fortunately for them, these fans probably don’t exist. Bjargtangar, which is considered the westernmost point of Europe [3], is an extremely isolated lighthouse. It is closer to Omaha, Nebraska than to Baku, Azerbaijan.

I could not determine whether it is inhabited or not, but one of the buildings at the site seems until recently to have housed an illegal pizzeria, called Sliceland. The ‘30 minutes or less’ rule probably never applied here, as the population is too thinly spread [insert pizza toppings joke here].

To get to Baku, these nonexistent Slicelanders would first need to drive six hours to the Icelandic capital Reykjavik, hop on a flight to the European mainland to a handful of cities that offer connecting flights to Baku – judging from this map, they would need at least two more stops to get there. By that time their quattro stagioni would of course be cold. Hopefully, Baku’s eateries serve up some good Icelandic-style pizzas.

This map was produced by Harry Hook, who was kind enough to send it in. Mr Hook lives in Australia, which is either a very large island or a very small continent. Its size can be judged from a set of maps published earlier on this blog – see #439.

[2] Whether Bjargtangar actually is Europe’s westernmost point, is also up for contention. The Azores, for example, are further out.

The Crisis of Meaning in the Millennial Workforce

Let me get this straight. I’m supposed to come to work with you and work every day with the singular goal of maximizing the value for faceless, nameless people who could blow us off in a nanosecond if they had a bad hair day. Am I right?