This rudimentary map, showing an Iran crudely cut in two, is currently making the rounds of social media in that country. Its message, as clear as it is simple, is that Iran is a house divided (1). More particularly, it is also a stark repudiation of controversial measures for ever stricter gender-based segregation in the Islamic Republic.

A country map is as powerful a symbol of national unity as a flag or a head of state. Yet many countries are as fundamentally defined by their internal divisions as by their external extremities. Belgium, a vaguely triangular piece of toast, is neatly sliced in northern and southern halves by the Dutch-French language border. The continent-splitting Ural Mountains define the brobdingnagian Russian state as both a European and an Asian power.

Iran too has internal divisions that belie the apparent stability of its national borders. So much so that to stress the country’s multi-ethnic make-up – Kurds in the northwest, Arabs in the south, Baloch in the southeast, and others – is almost tantamount to questioning its territorial unity (2). This map steers clear of that can of irredentist worms, by drawing the line straight across the – solidly Persian – core of the country. 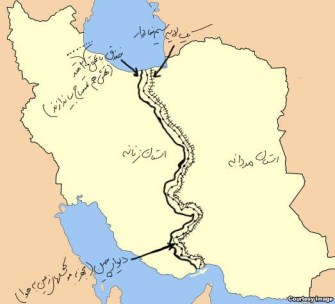 Yet at first glance, this map does seem to depict a physical border, hotly contested and deeply entrenched – think the Western Front of World War One, or the Berlin Wall during the Cold War. Left to right, three lines appear to denote a solid wall, the actual demarcation line, and a barbed wire fence, consecutively. But this border is completely virtual, unrelated to any ethnic divisions or topographic obstacles on the ground (3).

For this is about two other rifts – firstly in the minds, between Iranian liberals and conservatives (4); and consequently in the increasingly gender-segregated public sphere (on public transport, in university auditoriums, etc.) The legends on the map, in Farsi, read:

Islam’s rules for segregating the sexes are open for interpretation – and are applied with a huge degree of variation throughout the Muslim world. Living in one of the strictest Islamic environments, Saudi women are all veiled up and have nowhere to go, lacking the permission to drive. But in secular societies, women who self-identify as Muslim may lead lives that are virtually indistinguishable from their non-Muslim counterparts, sartorially and otherwise. Iranian women are situated somewhere between those two ends of the spectrum: obliged since the Islamic Revolution (1979) to wear the veil in public, yet able to participate in public life to a much larger degree than their Saudi sisters.

To which degree? That is the subject of an ongoing tug-of-war between moderates and conservatives in Iranian politics. Just how relative those terms are, is shown by the fact that the Iranian president Mahmoud Ahmadinejad – no bleeding-heart liberal he – is now coming out against some proposals for yet more gender segregation. This map, mocking the length to which some would go to separate Iranian men and women, is with the Iranian president on this issue – although one senses, from its acerbic tone, that there might be little else of agreement between the mapmaker and the president.

Clearly, in the complex world of Iranian politics, this battle of the sexes is a proxy war between clerical hardliners and other political forces within Iranian society.

More about that in this article at Radio Free Europe/Radio Liberty, whence this map was taken. Many thanks to Mike Beidler for sending it in (and for providing the translations for the Farsi captions).

(1) “A house divided against itself cannot stand”: the quote is associated with Abraham Lincoln, in an 1858 speech describing the US right before the outbreak of the Civil War. Lincoln was actually citing Jesus Christ, from Matthew 12:25.

(3) The line does seem to traverse Tehran, located just south of the Caspian Sea. Is there an east-west divide in the city between more and less conservative areas?

(4) These terms are relatively neutral, but nevertheless subjective. Either side no doubt uses more polarising definitions for the opposing camp.

(5) Might this geographical distribution reflect the traditional seating arrangements in [shi’ite] mosques?

How to Think About the War Against Death

1. So my post on Brooks and death got (for me) big ratings and a lot of fine criticisms–both here on BIG THINK and elsewhere.2. I pretty much agree with […]