Holy Land visitors of a deeply religious disposition risk being overwhelmed by the experiences of their trip. This type of culture shock is called Jerusalem Syndrome, after the city in which it often manifests itself. The syndrome involves obsessive, delusional and/or psychotic behaviour, not rarely leading to messianic hallucinations. The condition is mercifully ecumenical, afflicting Christians, Jews and Muslims alike. It is triggered by the proximity to religious landmarks (1), and hence the heightened perception of divine presence.

Similar syndromes manifest themselves in other cities that play havoc with the fervent anticipations of its visitors. Paris Syndrome is a psychosomatic condition that seems to afflict mainly Japanese tourists. Their vision of the City of Light is idealised to a high degree; upon arrival, the difficulty in processing the contrast with the reality of the place may lead to a broad range of physical and mental complaints. Rome Syndrome is less universal than its Jerusalem variant, pertaining almost exclusively to Catholic pilgrims (2). Those overwhelmed by the cultural treasures of Firenze are said to suffer from Stendhal Syndrome, after the French writer who first reported the palpitations, confusion and dizziness associated with visiting the city beautified by the Medicis.

To my knowledge, this syndrome has never been diagnosed for New York (3). Yet first-time visitors to the city often do report a certain disorientation. New York – and certainly Manhattan – has a distinct cityscape that’s known the world over, as it has been the backdrop to countless movies. First-timers might feel trapped on the wrong side of cinema’s fourth wall, dreading to meet Robert de Niro’s Taxi Driver everytime they get into a cab.

New York is not only a world capital of movies, but also of music. One of its best-known epithets, The Big Apple, was popularised by the jazz greats of the 1920s and 30s (4). The city’s been at the forefront of pop music ever since. In fact, an interesting itinerary can be constructed just by intersecting song lyrics mentioning New York locations with the city’s street grid. Hallucinations or no. 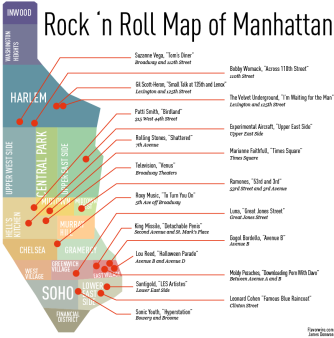 A musical topography like this requires relatively precise references – out goes Sinatra’s New York, who remains vague as to exactly where he wants to be “part of it”. That precision enables the pinpointing of artistic hotspots. The lyrical references by Sonic Youth, Leonard Cohen and Santigold on this map are relatively isolated in SoHo and the Lower East Side; the East Village boasts four references on a much smaller surface.

A single Roxy Music reference, on the border between Chelsea and Gramercy, provides the link to Hell’s Kitchen/Midtown hotspot, covered by the likes of the Rolling Stones and Patti Smith (referencing Birdland, the famous jazz club). Again, a single mention separates us from the next gathering of lyrical references in Harlem, where the Velvet Underground stands “waiting for the man” on the corner of “Lexington and one-two-five”.

As great an idea as this Rock ‘n Roll map is (5), a mere 19 lyrical topographies seems too small a selection.  Also, with about half the songs dating from the 1970s, is the mapmaker showing his or her age?

Now awaiting your suggestions for a more populated Rock ‘n Roll Map of Manhattan. And, who knows, a sufficiently dense lyrical topography may finally dazzle the musically interested visitor into a Big Apple, song-and-dance version of the Jerusalem Syndrome.

This map found here on Flavorwire.

(1) the Church of the Holy Sepulchre, the Western Wall and the al-Aqsa Mosque, respectively, to name but one for each of the three abrahamic monotheisms.

(2) which is ironic, considering the word ‘catholic’ actually means ‘universal’.

(3) other phenomena described as ‘New York Syndrome’ include a tendency constantly to use profanity; a desire to identify excessively with artists; and the avoidance of nearby, world-famous tourist attractions because you’re a local, not a tourist.

(5) and a simplified version, by the way, of the Manhattan Neighbourhood Map shown way back as #39.

Hanging by your Fingernails – The Fukushima Meltdown

The situation at Fukushima has stabilized—if your conception of stable is hanging off a cliff by your fingernails.