Is it a Sea Monster? No - It’s a Map of Science Fiction

And not just a map: also a timeline, a literary checklist and a historiography 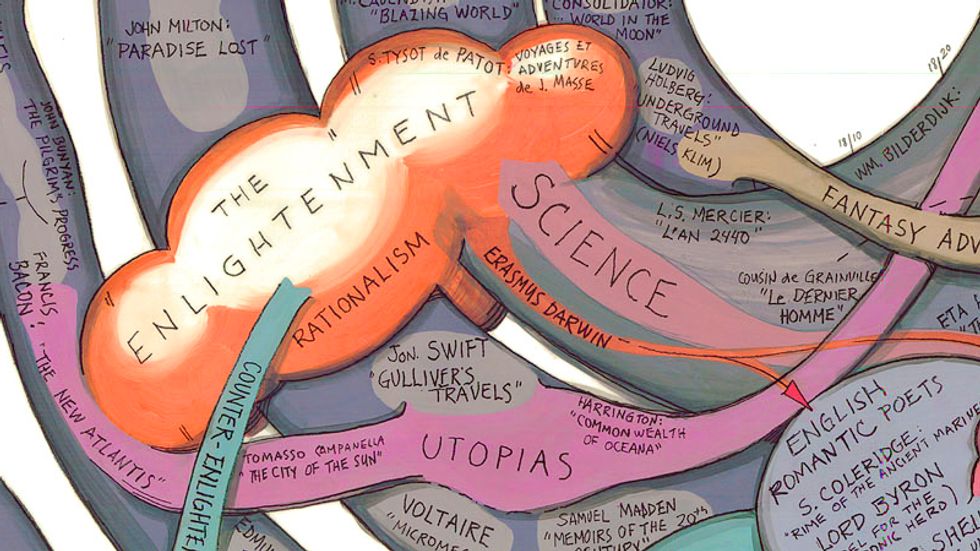 Is this the picture of a whale, as the empty eye-sockets on the right suggest, or of a giant squid, its tentacles waving over on the left? It is neither, but the image of a sea-borne behemoth is perhaps appropriate, as mysterious creatures of the deep - Moby Dick, Nessie, the Nautilus - have a more than tangential bearing on this diagram. Which is what this picture, on closer inspection, appears to be. And much more: it is also a piece of art, and a timeline; a literary checklist, and a historiography of a particular genre. It is probably a few other things too, but first and foremost it is a map, of places known and unknown, and the connections between them.

Entitled A History of Science Fiction, this map is the work of Ward Shelley, a Brooklyn-based sculptor, performance artist and painter (1). One of his specialties in the latter discipline are huge, chronological diagrams, including an Extra Large Fluxus Diagram, and a very illuminating Autobiography (2). This one maps out, left to right, the origins and evolution of an entire genre of popular fiction - science fiction.

A short, crisp definition of a genre as broad as SF is not easy, although the litmus test to distinguish it from its conjoined twin, fantasy, quoted on Shelley’s diagram, is helpful: Science fiction deals with improbable possibilities, fantasy with plausible impossibilities. In layman’s terms: if it has elves, it’s fantasy. If it has aliens, it’s SF.

One thing to bear in mind: no matter how far into the future (3) it is set, SF is always a critique of the time in which it was produced. Once this sinks in, you’re less likely to be annoyed by the flared-trousered spacesuits in Seventies SF. Then as now, some of the genre’s main themes revolve around deep space exploration, alien species contact, advances in robotics and computing, and human engineering of the space-time continuum.

But we are - perhaps true to the genre - getting ahead of ourselves. Let’s examine this map from its the curly-tentacled beginnings: the fear and wonder that have been humankind’s night-time companions ever since the invention of the campfire story.

Some ancient channels for pre-SF literature include philosophy (Plato’s Republic), mythology (the Anglo-Saxons’ Beowulf), pre-scientific imagination (the Golem of medieval Jewish lore), New World exploration (Defoe’s Robinson Crusoe) and art (Thomas More’s Utopia). The latter two works could just as easily have been classified in each other’s category, which reveals the flipside of Mr Shelley’s obsessively detailed work: its classifications are extremely debatable. That is, of course, part of the fun of this map.

SF remains a twinkle in the eye of the speculative fiction writer until two great literary traditions collide, or fuse: the Enlightenment (providing the science bit) and Romanticism (proffering the fiction part). This would ultimately lead to SF, meanwhile also cradling the Gothic novel, modern versions of folk and fairy tales, and other genres, some (4) flowing into sinkholes towards, one suspects, elaborate diagrams of their own.

The years leading up to 1900 produced some classic works of early science fiction such as Mary Shelley’s Frankenstein, or L.S. Mercier’s L’An 2440. It also saw three prolific and iconic writers, each contributing to the fast-growing field of SF: Jules Verne, H.G. Wells and E.A. Poe. After 1900, the genre explodes into an unwieldy clutter of subgenres, dominated by a plethora of influential magazines with titles like Weird Tales and Astounding.

A generalised chronology distinguishes between periods dominated by adventure (the ‘rockets and rayguns’ era after 1920), science (SF’s ‘Golden Age’, after 1940), sociology (the ‘Classic Period’, after 1950), form (a ‘New Wave’, after 1960), and Star Wars (SF morphs into Mainstream Styles, after 1980). Some influential genres are mentioned, like the Space Opera, ‘Soft’ and ‘Hard’ SF, and Cyberpunk. The rest of the diagram is replete with hundreds of books - and films - representing the widest imaginable variety of stories, thus providing, for even the semi-interested reader of SF, a handy map of vast areas yet to be explored...

Many thanks to Nick Andert, J.B. Post, Jeff Cupp, Stannous Flouride, Sue Somers and Toon Wassenberg for sending in this map, a winning entry in annual competition for best science maps, organised by Places & Spaces. More about this competition, and a look at other maps, here.

(1) See it larger (and larger still) on Mr Shelley's own website.

(3) Typically either a future in which science has made huge strides forward (towards utopia) or, more frequent in recent years, society has collapsed (into dystopia). Strictly speaking, these evolutions need not take place in the future, but can also happen in alternate realities, be they past or present.