Where is the geographical midpoint of Europe? The question is straightforward enough, but the answer isn’t. It depends on what exactly you mean by Europe. Does the term define a continent or a political project? If a continent, is Turkey in it? Is Armenia? Which outlying islands are, which vestigial colonies (1) aren’t? And if Europe is a political project, which one? The European Union, the Council of Europe, the Schengen Area, the eurozone (2)?

To such a remarkably elastic concept, one constant seems to apply: whatever its definition, geographers (and politicians, and tourist offices) want to find out where its middle is, and mark it with a curiously bland monument. Europe is dotted with at least a dozen of these monuments. This map shows seven European centre-points, including the oldest, and the currently most accepted midpoints. What follows, provides some explanation on these and a few other claimants. 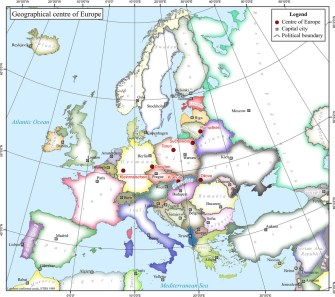 You don’t need a degree in geography to see that many of these claims are infused with a considerable dose of nationalism. It’s very tempting to find one’s own city, region or country at the centre of the European concert of nations. Even if the definition of what is Europe (or the method to calculate its geometric centre) need to be bended just a bit:

There are, however, more objective criteria for selecting a European centre. Such as using a specific number of well-defined nations, like the members of the main European supranational body, now known as the European Union. Since its inception in 1957 (5), the EU has grown from a 6-member association to a 27-nation union. The geographic centre has shifted every time one or more new member states acceded, which has happened on seven separate occasions.

France’s Institut Géographique National (IGN)has calculated the geographic (or, more precisely, the geometric) centre of this expanding ‘Europe’ since at least 1987. Here are the four last phases of enlargement.

France might no longer be the centre of the European Union, it still contains the midpoint of the eurozone.

So, in that cacophony of centralities, is there a Midpoint of Midpoints, a European Centre everyone can agree upon? Well, probably not everyone, but something close enough: in 1989, a new calibration of the continent’s borders led Jean-George Affholder of the IGN to determine that the geographic centre of Europe was located at Bernotai, near Purnuškės (54°54′N, 25°19’E), a small town in Lithuania about 16 miles (26 km) north of the capital Vilnius. An impressive white granite monument was erected in 2004. Lithuania has the best credentials, as its midpoint is the only one recognised as such by – no, not the EU, or any of the other European supranational bodies – but by… the Guinness Book of World Records.

This map was found here on the Wikipedia page for Europe’s midpoints. If anyone knows of a map detailing all (or more) midpoints mentioned in this post, drop me a line. The stories of Europe’s (generally eastward-moving) midpoints are reminiscent of the history (and westward drift) of America’s mean population centre, as described in #389.

(1) France’s overseas territories like French Guyana in South America are integral parts of France itself, hence also of the European Union. Other European countries (i.c. the Netherlands and the UK) also maintain links to overseas territories, although in varying degrees of integration into the ‘motherland’.

(2) Lower-case, as it refers to a currency. Also: euroland. Officially: euro area.

(4) Sounds like Bela Lugosi, the actor typecast as Dracula, adding to the country’s perceived grimness; before its name-change in 1991, the country was known as B(y)elorussia or White Russia. They should have stuck with the latter name, which at least refers to a popular cocktail.

(5) Then the European Coal and Steel Community. It was merged into the European Economic Community in 1967, and finally European Union in 1993.

An independent researcher looks into why there’s such strong opposition to her research.
Up Next
Culture & Religion

Do People With Autism Experience Emotions?