Eilert Sundt must have had a busy, happy week. As the president of the Norwegian Cartozoological Society, Mr Sundt probably is the world’s most prominent ambassador of the obscure discipline of cartozoology (1). This unlikely cross-breed of cartography, zoology and urban planning got a huge boost last week, when the government of South Sudan announced plans to remodel its 10 state capitals in the shapes of animals and fruit.

Under the proposal, the regional capital Juba would be laid out as a rhinoceros. Wau, capital of Bahr el-Ghazal state and South Sudan’s second city, is to be restyled as a giraffe. A third one would  be transformed into a pineapple. The other state capitals would also be remodelled to look like the flora or fauna in their state emblems. “Finally, finally, the world is starting to see things my way,” Mr Sundt must have exulted.

But being the conscientious Scandinavian he doubtlessly is, his triumphant newsletter contained a caveat: “It pains us to say it, but even if the idea is beautiful, we are afraid that the [South] Sudanese authorities haven’t got their priorities straight.” 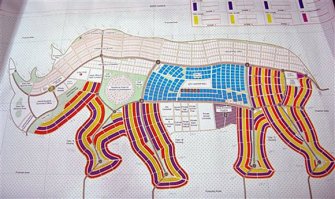 The cartozoologist obviously refers to the dire straits, financial and humanitarian, that South Sudan currently finds itself in. The zoomorphic (2) remodeling would cost just over $10 billion (and take about 20 years). South Sudan’s total annual budget is a mere $2 billion. South Sudan, christian, animist and black African, is still recovering from the 21-year civil war it fought with the Sudanese central government, which is Arab and muslim in outlook. The UN estimates that 9 out of 10 Southern Sudanese live on less than $1 a day. Hunger is common, paved roads are rare.

A referendum next January is expected to result in independence, making South Sudan (3) not only the newest, but also one of the poorest nations on Earth. The levels of corruption are such that it is called, only half-jokingly, a pre-failed state. Much of that corruption, as well as the main hope for future progress, is based on the region’s oil wealth, providing 98% of the aforementioned national budget.

So are the plans to transform Juba, the national capital in waiting, into Rhino City a crass example of money-wasting corruption (4)? Or are they a clever way to raise the profile of South Sudan enough to eventually attract visitors other than oilmen and aid workers?

Despite Mr Sundt’s misgivings, the latter is not unthinkable. While not exactly cartozoological, the artifically modelled World and Palm Islands off the coast of Dubai have attracted heaps of media exposure (and investment, probably). South Sudan’s Rhino City, Giraffe Town, Pineappleville and other beastly burgs or plantlike polities  might just exude enough appeal to attract a certain brand of curio-seeking traveller.

A truer, if less well known example of cartozoology was discussed earlier on this blog: Ciudad Evita, an Argentine development shaped to look like Evita Peron’s profile (see #346). But yet another example posted earlier on Strange Maps shows one major downside of cartozoology – whether intentional or not.

The pachyderm that reveals itself when you quarter-turn the map of southern Ontario (see #340) not only sports a gloriously trumpeting trunk and an excitedly raised tail, but also – in the city of Owen Sound – an obvious elephant’s arse. By the same token, nobody would want to live at or near a place equated with a rhinoceros’s backside (just imagine the directions: ”Take a left at the hind leg, and then, erh…”). The issue is skirted around by the South Sudanese authorities – who nevertheless do demonstrate their appreciation of the finer points of cartozoographic positioning:

This image was taken here from Fast Company. Picture by Peter Muller/AP. Any additional images of the maps themselves would be greatly appreciated.

(1) The Norsk Kartozoologisk Forening (Norwegian Cartozoological Society) defines cartozoology as: “[t]he study of animals whose outline appears paradigmatically in the streetscape on the city map, especially with regard to the physical signs of animal presence in the corresponding terrain.”

(3) If that will be the name of the new state. It seems a waste of energy to wage a separatist struggle, merely to prefix a wind direction to the country you’re so determined to break away from.

(4) South Sudan’s parliament still needs to approve the plans, but talks to develop the animal- and vegetal-shaped zonings are already under way with foreign construction firms.

Hurricane Katrina may have cost them their homes and split up their families, but some credit it as the impetus to reinvent their lives for the better, explains Nicole LaPorte.