Sao Paulo is the only one of Brazil’s 26 states to include a map of the entire country on its flag; the Paulista state motto exhorts its citizens to Let great things be done for Brazil. And yet, Sao Paulo State historically harboured a more persistent regionalist, and even separatist sentiment than any other Brazilian state.

Sao Paulo is the richest, most populous state of the Brazilian federation. It is also the West’s most populous sub-national entity (*). At over 42 million inhabitants, Sao Paulo would rank 31st out of the world’s 223 independent countries, just behind Tanzania and right in front of Argentina. It would be the fifth most populous nation of the Americas (after the US, what would be left of Brazil, Mexico and Colombia). According to some reckonings (**), the eponymous state capital with its 11 million inhabitants is the biggest city in the Western world.

Population size isn’t the only thing that matters, though. Even back in 1842, when still very sparsely populated, Sao Paulo demonstrated the go-it-alone streak in its character by rebelling against the Emperor. The Paulistas expressed this streak politically by their adherence to the PRP (Partido Republicano Paulista), founded in 1873 to advocate the overthrow of the Empire in favour of a republican system.

When the republic of Brazil was eventually proclaimed in 1889, the PRP got its hands firmly glued to the levers of Brazil-wide power, which it shared with the PRM, from neighbouring Minas Gerais state. The arrangement saw the PRP and the PRM divvy up the presidency and political influence in the capital Rio de Janeiro. It was a cohabitation known as cafe com leite (‘coffee with milk’), as Sao Paulo’s economy was based on the former, Minas Gerais’ on the latter commodity. 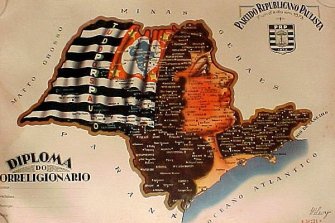 This map celebrates Sao Paulo’s separateness from the rest of Brazil by portraying it anthropomorphically. The unnamed lady – let’s call her Paula – thus serves as Sao Paulo’s very own version of France’s Marianne or the UK’s Britannia: a symbolic female as allegory of the state’s unique history, territorial homogeneity and separate future. One could say it does so better than the French or British figureheads, as ‘Paula’ actually coincides with the borders of her state.

The emblematic female wears the state flag in her hair, but the slogan is not the one referred to earlier. It reads Everything for Sao Paulo. It would be interesting to learn how the PRP managed to balance the inherent separatism of its regionalist agenda with the demands – and the benefits – of its share in federal governance. Or maybe it didn’t, in the long run. For the PRP/PRM cohabitational system collapsed in the early 1930s, with the power-grab of Getulio Vargas, who abolished both parties and went on to establish a populist, authoritarian Estado Novo. The more regionally inclined elements in Sao Paulo State opposed this evolution. Incipient rebellion turned to inchoative secession in 1932, but the so-called Paulista War was crushed by federal troops in a few months’ time.

Many thanks to Vinicius Morello for sending in this map. For another state shaped like a lady, see #473.

(*) Only if one excludes England, the grounds for which are somewhat debatable (i.e. England’s historic and demographic importance for the UK is such that it is more than a mere ‘sub-nation’).

(**) the ones that exclude the suburbs.