Despite the levelling force of the Revolution, France is still very diverse - often in weird and surprising ways 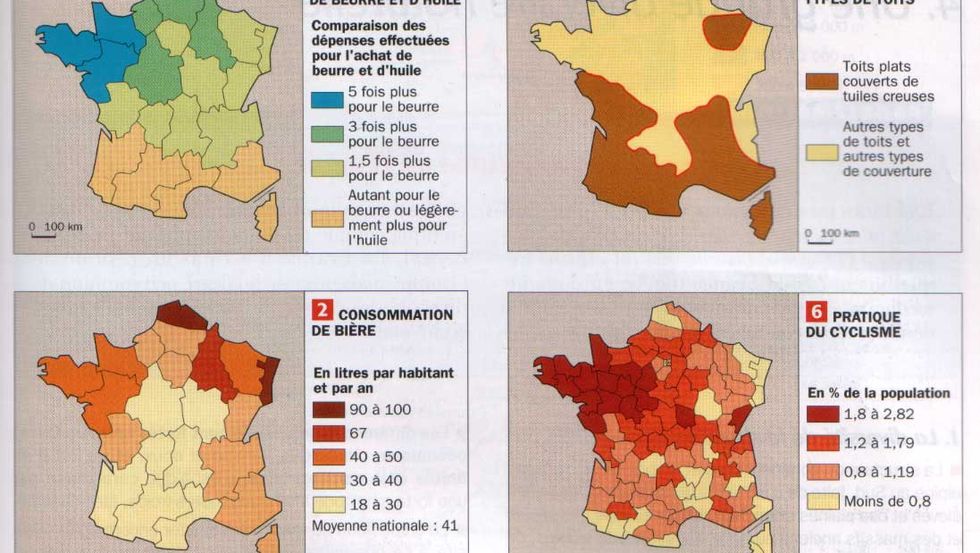 All French towns of above a certain size, in any of the six corners of the country, have a Place de la République at their centre, and an Avenue Charles de Gaulle in its vicinity. France’s 101 départements are numbered alphabetically – and there once was a plan to make them all perfectly rectangular (#159).

Since the French Revolution, over two centuries ago, a rationalist vein has been coursing through France's administrative politics - towards homogeneity and centralisation. The French version of Anytown, as described above, is one patent result.

And yet in some ways France remains a very unhomogenised country. “These maps illustrate the perdurating cultural diversity of contemporary France, in spite of a long-time process of cultural unification,” writes Olivier, who sent in these maps from Tours (capital of département number 37, Indre-et-Loire).

Even though standard French has by now replaced most of France’s regional languages, that vanished linguistic diversity remains a good marker for cultural variation within France. The southern third of the republic was once the domain of a rival romance language, the so-called Langue d’Oc (or Occitan), so called after its word for ‘yes’ (oc). This area was (and is) more ‘mediterranean’ in outlook than the northern rest of France, where the Langue d’Oïl (i.e. French, or its dialects) was spoken.

To this binary view should be added the other, non-romance language areas of France, in the north (Flemish), east (German), south (Basque) and west (Breton). Another linguistically distinct region is the small area around Perpignan, where another romance language – Catalan – is spoken.

Each of these five maps, taken from the 1997 edition of Géographie Première, a schoolbook by Rémy Knafou, slices up metropolitan France in surprising ways, but also every time reflecting, in some way, the divisions described above.

Map [2] shows between 90 and 100 litres of beer per inhabitant imbibed in the north and east, with less than half of that in most of the country, but especially in the south. See the entry on Europe’s alcohol belts (#442) for a similar take on regional differences in alcohol consumption.

Map [3] reveals how many members pétanque clubs have per thousand inhabitants. The game was conceived in Provence, and its name derives from the Occitan pès tancats, meaning ‘anchored feet’. In keeping with its southern origin, it is 10 times more popular in the Occitan swathe across the south of France than in the north, northeast and northwest.

Map [5] charts the dominant roof type throughout much of the south (and, surprisingly, in the northeast): flat roofs with curved tiles.

Map [6] details the popularity of bicycle clubs. The sport of the Tour de France is most popular in Brittany, but also adjacent areas inland (darkest red), and quite popular throughout most of central and northern France (orangey red). The areas least likely to cycle are scattered throughout the north, northeast, east, southeast, and south.

Many thanks to Olivier for sending in these maps.