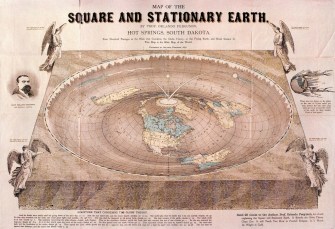 We’ve discussed the Ancient Greeks’ snowglobe vision of the Universe(#288), tackled the far-out theories of the Hollow Earth (#85), and yet managed to be surprised by the absurdity of the square earth theory. It seems unnecessarily implausible to add straight borderlines to the already farfetched model of a flat earth. But not only does the square earth theory still have proponents today, it was the common world-view of yesteryear (which explains why we still use expressions like The four corners of the world).

A look at the discourse of modern defenders of the Square Earth explains why: almost all of their arguments are biblical, which they choose to take literally instead of poetically, in the face of overwhelming scientific evidence to the contrary. A lot is explained by the opening quote on the website of the International Square Earth Society:

“After this I saw four angels standing at the four corners of the earth, holding back the four winds of the earth to prevent any wind from blowing on the land or on the sea or on any tree.” (Revelation 7:1)

The website rails against ‘lazy Biblical literalists’ who ignore the Good Book’s geodetic information. In the true spirit of factionalism, the first enemy attacked by the square-earthers are the… flat-earthers: “Even the late, great Charles K. Johnson, the valiant fighter for Truth who carried the message of earlier Zetetic Astronomers forward into the twentieth and twenty-first centuries by founding the International Flat Earth Society, made the grievous error of assuming that the Earth was shaped like a circular disk. Nothing could be further from the Truth.” (note the capitalisation of truth – making it rarer and more precious).

In layman’s terms (and I use that expression with some trepidation), that leaves us with only two possible shapes: a square, or a diamond, with each of its corners pointed to each of the main compass points. But since God is perfect, and a square is a more perfect rhombus than a diamond, the Earth must be square! (“Its rectilinear corners perfectly match the rectitude of God.”)

If you’re more into baseball than geometry, here’s a translation of the arguments above: “Of all the nations on Earth today, God most loves the United States of America. (This is evident from songs like ‘God Bless America’, and from the fact that Pat Robertson, God’s chosen spokesman, lives in the US). America’s national pastime is the game of baseball. Baseball is played on a ‘diamond’, which is perfectly square in shape – and which, I might add, has its corners oriented to point toward the four compass points. God would not have made baseball into the national pastime of His favorite nation if He didn’t have a higher purpose in mind for it. Clearly, His higher purpose is to show us the True shape of the Earth. The Earth must be perfecly square, just like the diamond-shaped field in God’s Chosen Sport is square.”

After this lengthy exegesis, the stunned reader is further subjected to a shocking Q&A:

By this time I think it’s time to share with you our suspicion that Roger M. Wilcox, the author of the International Square Earth Society webpage, has a gift for sarcasm and parody rather than a tendency to literalism (1). But this map of the Square and Stationary Earth is an expression of the latter rather than the former. It was produced in 1893 by professor Orlando Ferguson of Hot Springs, South Dakota, in a time before Hollywood, airline pilots, and indeed sarcasm and parody (at least in South Dakota). Ferguson was an epigone of an obscure subset of modern geocentrism (2), the ‘mainstream’ of which does not insist on rectangular borders for the Earth, but contents itself with it being stationary at the centre of the universe, which revolves around it.

Prof. Ferguson states (quite seriously this time, we assume), that there are “four hundred passages in the Bible that condemn the Globe Theory, or the Flying Earth, and none sustain it. This map is the Bible Map of the world.” His map shows the Earth to be a flat, square disk that, judging by this less than perfect image, has a circular concavity almost touching the edges, out of the middle of which emerges a convexity with the North Pole at its (and the map’s) perfect centre.

Many thanks to Kris Delacourt for sending in this map, found on this Wikipedia page.

Update 17 May 2011: Many thanks to Don Homuth for sending in a complete, hi-res pic of the Orlando Ferguson map. The one floating around the internet incomplete and of lower quality. Mr Homuth holds what he suspects may be the only extant copy of Prof. Ferguson’s Map of the Square and Stationary Earth, and is currently negotiating to donate it to the Library of Congress or the Smithsonian. Many thanks for your services to (curious) cartography, Mr Homuth!

(1) also check out the hilarious Praise for the International Square Earth Society section.

(2) those who continue to hold on to the notion that the Sun revolved around the Earth in modern times, in the face of overwhelming evidence to the contrary a disturbingly large proportion of the population; a 1996 Gallup survey put their share at 19% in the UK, 16% in Germany and 18% in the US.

Expert Matthew Ball explains how the Metaverse is a golden opportunity to fix the internet.
▸
4 min
—
with
Matthew Ball
Up Next
Strange Maps