A few miles northwest of the small town of Minden, in the seemingly endless Nebraska plains, lies a field shaped like the state itself. By intelligent design or as an accident of agriculture?

Either option seems unlikely in a landscape so utilitarian that efficiency has imposed symmetry upon it. These plains are cut into perfect squares, with sides exactly a mile long. The straight lines dividing the squares are semi-anonymous roads, named after numbers and letters.

The only other pattern thriving in this checkered landscape is the circle, touching the edges of many squares (as seen on the left of this picture): a sign of the popular method of centre-pivot irrigation. As pretty as that might look from the sky, all these squares and circles are practical first and foremost. This is not a topology of frivolity. Why lose a bit of perfectly arable land only to sculpt something as pointless as a map? 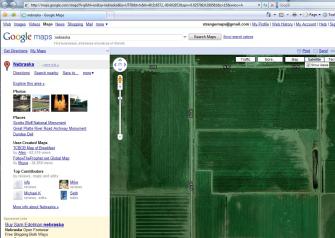 Is Nebraska Field a coincidence, then? When not being centrally irrigated, each of the mile-by-mile blocks is often divided into smaller fields, mostly rectangular but not really symmetrical. That sort of describes the shape of Nebraska – but still, chances of a field mimicking it so perfectly seem very remote indeed.

Nebraska is rectangular in an oblong sort of way, with straight borders everywhere except in the east, where it is bounded by the Missouri River. An immediately recognisable feature on its western border is the square chunk bitten out by Colorado, allowing that state to be completely rectangular.

The field mimics all these shapes: the straight lines north, west and south, the indentation in the southwest, the slightly slanting eastern border, near what looks like a little, elongated lake. And all in the right proportions too. 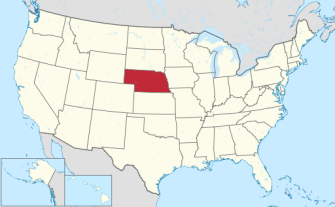 So: coincidence or design? It has to be one or the other. But the only thing we know for sure are the circumstances of the Field’s discovery. “It was a complete coincidence, which is the best part,” says Adam Kommel, who sent in this map. “I was just goofing off on Google Maps during the weekend, seeing if I could find the largest all-green spot in the middle of the country. I zoomed in a bit and all of a sudden I just saw it.”

The mysterious Nebraska Field does not seem to have achieved even local fame. The town of Minden only boasts a Pioneer Museum, and each December hyper-decorates itself to defend its reputation as Christmas City. Any extra information on the Nebraska Field and its creator/owner would therefore be greatly appreciated!

Many thanks to Mr Kommel for finding and sending in this rather peculiar map-in-a-map. Overview map taken from Wikipedia’s Nebraska page.

Related
Starts With A Bang
The galaxy cluster that broke modified gravity
19 years ago, the Bullet Cluster provided an empirical proof for dark matter. Even today, modified gravity still can’t explain it.
Neuropsych
Psychology studies that go viral are likelier to be bogus
A new 20-year analysis of over 14,000 psychology studies finds that a study’s media coverage is negatively linked to its replicability.
The Future
How a device transmits radio waves with almost no power
Apart from the energy needed to flip the switch, no other energy is needed to transmit the information.
The Present
Radical idea: Redraw the U.S. map as a nation of city-states
While cities drive national economic growth, their political geography means they cannot effectively deal with inequality, poverty, and other socioeconomic problems.
The Learning Curve
Why do high IQ people stagnate in their careers? Emotional intelligence
Research suggests that emotional intelligence is more vital for success than IQ.
Up Next
Strange Maps
Celebrating the Brief, Wondrous Life of Cartozoology
The weird sport of hunting for animals in maps