Lions are not native to the Low Countries, but here is one particular specimen that is nevertheless very local. The Leo Belgicus is a lion transposed on a map of the area, its ferocity symbolizing the belligerence of a nation fighting for its life.

Confusingly, that nation is not, as the name would suggest, Belgium. Nor is it the Netherlands. The modern acronym Benelux more accurately describes the entity depicted by the Leo belgicus: Belgium, the Netherlands and Luxembourg.

In the 16th century, that general area was also known as the Seventeen Provinces, first under Burgundian and later Spanish tutelage. As the plural description suggests, these provinces were a loose confederation with little or no unifyingly ‘national’ sentiment.

That changed when religious upheavals pitted the increasingly protestant and independent-minded locals against their staunchly catholic Spanish overlords. The old Roman toponym Belgica was used to provide the entire Low Countries with a single geographic denominator.

The Austrian cartographer baron Michael Aitzinger, probably inspired by the prevalence of lions in the coats of arms of many of the Seventeen Provinces, drew the first Leo Belgicus in 1583, fifteen years into the Eighty Years’ War of the Spanish in the Netherlands. The long war soon became a stalemate, with neither party able to achieve total victory.

At the Peace of Westphalia (1648), the de facto situation was officially recognised: seven provinces in the North had become an independent protestant republic, henceforth known to geography as Belgica foederata (the republican Netherlands), the South remained catholic and Spanish – and royal (Belgica regia). The Lion had been cut in half. 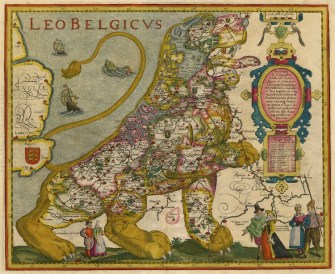 Leo Belgicus by Petrus Kaerius (1617), copied from the original design by Michael Aitzinger. Image taken here from the website of the Sanderus map shop in Ghent.

The Leo belgicus exists in several forms. The oldest one is of a lion rampant, its head in the northeast of the Low Countries and its rear taking shape in the southwest. This original position might give a clue as to just how Aitzinger might have conceived of the Leo belgicus. The mouth of the lion corresponds roughly to a remarkably rectangular shape in the Dutch border with Germany (a 20 by 20 km square bordering Coevorden).

A later version shows the Belgic Lion passant, with its head where its tail was, and vice versa. The map is oriented towards the west. The curving North Sea coast shapes the lion’s back. The lion’s less agressive pose reflects the Twelve Years’ Truce (1609-1621) between the Spanish and the Dutch.

The Leo Belgicus symbolised a nation that never was – a Netherlands that also was a Belgium, and covered the territory of both now separate countries. The deepening of the intra-Netherlands split made the Leo Belgicus redundant. The curiosity lived on, though, as a Leo Hollandicus, adapted to reflect only the the province of Holland, core of the independent Dutch republic. 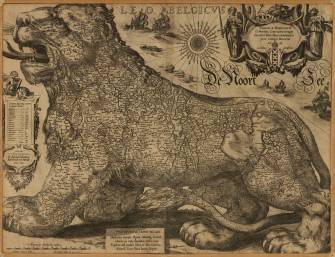 Leo Belgicus by Jodocus Hondius (1611) taken here  from this website.

(*) Roman Gallia Belgica covered the southern part of the Netherlands, Belgium, Luxembourg and parts of northern France and western Germany. Its name derived from the Belgae, a collection of Celtic/Germanic tribes. Belgica gave rise to the French term belgique (originally also an adjective, that later became a noun) and Belgium.

(**) The Netherlands and the corresponding terms in other languages (Pays-Bas, die Niederlände) refers to the current country which, curiously, in its own language speaks of itself in singular form: Nederland. The plural de Nederlanden still refers to the larger, Benelux-sized territory.