It takes aspiring London cabbies two to four years to acquire ‘The Knowledge’. Only if they know their way around the 25,000 streets in a 6-mile radius from Charing Cross (and along 320 main roads within Greater London) will they be licensed to drive one of London’s iconic black cabs. The London Taxicab Examination System is reputed to be the hardest of its kind in the world, and this speaks to the complexity of the British capital’s road grid.

That complexity, and the cabbies’ Knowledge, put passengers at the risk of being overcharged, the Victorians feared. Mid-19th century, even before the current Examination System was instituted (in 1865), a Mr John Leighton devised a system to prevent passengers from being taken for a proverbial as well as a literal ride. Leighton, a Fellow of the Society of Antiquaries, published a scheme to divide London in a number of hexagonals, specifically aimed at preventing overcharging by cab drivers.

“John Leighton suggested that the old borough boundaries should be altered to conform to a honeycomb pattern. Within a 5-mile radius of the General Post Office all the sprawling, differently sized boroughs were to become hexagonal-shaped areas, 2 miles across. There were 19 altogether with the City in the centre of the honeycomb. Each hexagonal borough would be identified by a letter, and the letter as well as a number would be painted or cut out of tin-plate to be visible by day and night on lampposts at every street corner.” 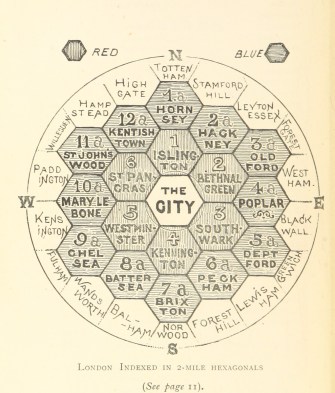 The proposal for a hexagonal London is described in London As It Might Have Been, a book by Felix Barber and Ralph Hyde, also detailing plans for a giant pyramid to house the remains five million dead Londoners, and a scheme to erect a structure in Wembley to dwarf the Eiffel Tower in Paris.

Leighton’s hexagonal plan obviously never came to fruition; it is strangely reminiscent of a proposal dating from 1790 by Jacques-Guillaume Thouret to divide France into completely rectangular departments (#159) and of the ideal, geometric city as envisioned by Sir Ebenezer Howard in 1898 (#234).

Of the two maps shown here (*), the one the left shows the Metropolitan Parliamentary Boroughs as Constituted Under the Act of 1855, centred on the City, and shown with their subdivisions (St Pancras, for example, is divided in N, S, E and W). The result is a veritable hodgepodge of miniscule fiefdoms. The map on the right presents a more regimented view of London, re-divided in 2-mile hexagon-shaped boroughs, centred around the City in three concentric circles.

Six boroughs in the first circle are numbered thus (clockwise from the top):

Twelve boroughs in the second circle are numbered thus (clockwise from the top):

Eighteen boroughs, unnumbered, are in the third circle (clockwise from the top): 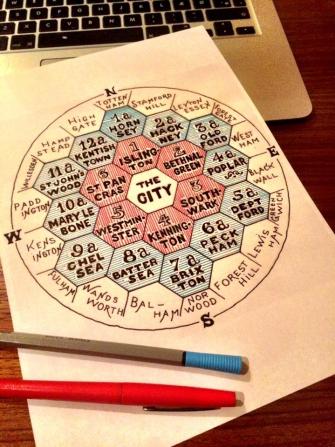 Many thanks to Simon Austin for sending in this map, found on Kosmograd, a blog animated by an interest in, among other things, utopian architecture, disurbanism, cyberspace. As the original image, in black and white, indicates a colour scheme, I produced my own version of the map, below.

Which TV Shows Aliens May Be Watching

If extraterrestrials were monitoring American television, here’s what they would be watching. In the Fomalhaut system, for example, maybe everybody’s crazy about Miami Vice.