World War II is coming to the Aldebaran star system, 65 light years from Earth. Local television viewers will be shocked by the TV footage, actual and dramatised, of Earth’s bloodiest conflict, which took the better part of seven decades to reach them.

Fortunately, they have better things to look forward to. By now, transmissions of The Lone Ranger and Howdy Doody have reached Pi Mensae system, somewhat closer to Earth, and will be reaching them in the years to come.

Viewers in the Iota Horologii system are about to be hit by I Love Lucy and Captain Kangaroo, while anyone with a working TV set near Mu Arae is at present doubtlessly hooked on The Twilight Zone and Bonanza.

All of that is old news to the alien life forms circling Beta Aquilae, deep in the throes of first-wave Beatlemania from just having seen the Fab Four on the Ed Sullivan Show.

The inhabitants of the Zeta Reticuli system will be less thrilled with the TV signals reaching them from Earth, showing them landing a craft on the Moon – and warp-driving the star ship Enterprise across the universe. What if they show up here next? 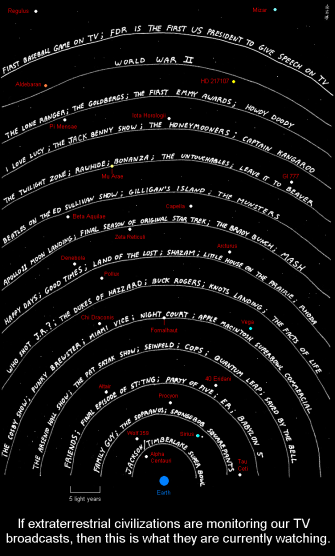 If they wait a few years, shows like Happy Days and Little House on the Prairie will convince them of the Earthlings’ good intentions (if not their gullibility) – Maybe they’re thinking: How about we show up there next?

Just wait a bit longer, and there will be so much on TV you won’t even get out of the couch anymore – or whatever it is you sit on. The good folks at Chi Draconis are in the middle of watching our Eighties stuff right now: still enjoying Buck Rogers and The Dukes of Hazzard, and soon adding The Cosby Show and Miami Vice to their viewing schedule.

Pretty soon, Fomalhaut will start receiving the first episodes of Seinfeld – but somehow it seems doubtful that a show about nothing could travel so far through the vacuum of space without losing something.

This map is a few years old, so the TV-watching creatures near Alpha Centauri have gotten some more time to recover from the infamous ‘wardrobe malfunction’ during Janet Jackson and Justin Timberlake’s halftime show during the 2004 Superbowl.

All this is assuming, of course, that all the aforementioned extraterrestrials prefer American TV to, say, German Fernsehen. And – this surely is the greater assumption – that our terran television signals are able to penetrate the universe in a way that makes them receivable in the far-flung corners of our galaxy.

Many thanks to Patrick McComb and Wallace J. McLean for sending in this map, found here on Abstruse Goose.