“Having been condemned by Nature and Fortune to an active and restless Life, in two Months after my Return I again left my native Country, and took Shipping on the Downs on the 20th Day of June 1702, in the Adventure, Capt. John Nicholas, a Cornish Man, Commander, bound for Surat.”

Thus begins the second part of Gulliver’s Travels, which will see Jonathan Swift’s fictional hero Lemuel Gulliver shipwrecked once again, though not this time on Lilliput, the strange land inhabited by tiny humans that he visited in the first part, but on Brobdingnag, where the people by contrast are huge; Gulliver is no longer a giant among men, but a dwarf among giants.

As indicated by this map printed in early editions of Gulliver’s Travels, the land of Brobdingnag seems to be located on the Californian coast, just north of New Albion. The inclusion on the map of that English colony, named by Francis Drake, might be to underline the nowhere-ness (or u-topia) of Brobdingnag, as the exact location of Drake’s land-claim was deliberately obfuscated by the English crown, and has been debated fiercely ever since.

New Albion has been positioned just north of San Francisco, and anywhere north from there along the Pacific coast – which does not, however, contain a peninsula in the rather peculiar shape of Brobdingnag. The only shape vaguely similar is that of Canada’s Vancouver Island – but that is not a peninsula. To make matters even more confusing, indications in the text itself would place Brobdingnag in Micronesia. Furthermore, Brobdingnag is described as being continent-sized – 6,000 miles long and 3,000 miles wide. Which doesn’t fit with any land mass, in Micronesia or on the Pacific coast of North America. And even more fantastically, Brobdingnag is separated from the continent by a volcano range of up to 30 miles high – a gravitational impossibility. None of this is an accident; Swift’s own obfuscating reflects his skepticism of the reliability of contemporary travel writing.

Although 60 feet (18 m) of height, the giants of Brobdingnag nevertheless stand less tall in the popular imagination than the dwarves of Lilliput. While ‘lilliputian’ has become a more or less general adjectival synonym for ‘tiny’, ‘brobdingnagian’ has become rather less used (for ‘colossal’), although Italy has been described as ‘the brobdingnagian boot’.

Rather appropriately, the lack of appreciation appears to be mutual. After Gulliver explained the ins and outs and what have yous of 18th century European politics, the King of the Brobdingnagians declares:

“I cannot but conclude the Bulk of your Natives to be the most pernicious Race of little odious Vermin that Nature ever suffered to crawl upon the Surface of the Earth.” 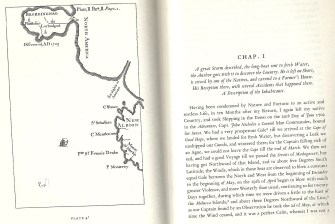 This map taken here from the Classic Case of Madness blog. Strange Maps #83 deals with another of Gulliver’s fictional countries – the Land of the Houyhnhnms.