Each Englishman is an island, they say, but apparently it takes a Frenchman to put that saying into practice. Philippe Gonzalvez made this map of his own face back in the 1980s. “I must say that by now there is much more snow on the Mountains of Moustache and that the Hair Republic has been invaded by the Federation of the Face,” he reports.

The northern part of Philippe Gonzalvez Island is taken up by the République de Cheveux (Hair Republic), bordered in part by the Fleuve Ride (Wrinkle River), beyond which lies the Fédération de la Face (Federation of the Face). Straddling both states are the Massif de la Calvitie (Mountains of Baldness) and Massif du Front (Mountains of the Forehead). The third state on the island is the Emirat de Barbe (Beard Emirate), mainly in the south. Its northern part is dominated by the Désert de la Joue (Desert of the Cheek).

The Federation of the Face is dominated by three mountainous areas: Mont Sour and Mont Cil (sourcil is French for ‘eyebrow’), and the Chaîne de la Moustache (the Moustache Range). A fourth mountain range borders the eastern coast, beyond the Desert of the Cheek: the Chaîne du Lobe (the Earlobe Range). Just south of Monts Sour and Cil are two lakes: Lac Yeux and Lac Œil (œil, plural yeux, is French for ‘eye’), each containing an island –  Île Pupille and Île Iris respectively. 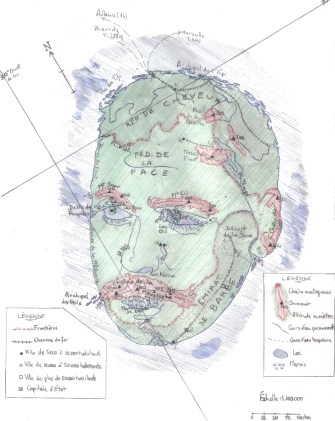 The western coast is typified by two dune ranges, the Dunes du Front and the Dunes de la Mâchoire (the Dunes of the Forehead and of the Jaw), separated by the Delta de Paupière (the Eyelid Delta). Other bodies of water are the Fleuve Nez (Nose River), Lac Narine (Lake Nostril), the Marais de Lèvre (Lip Marsh) and the Fleuve Menton (Chin River). Off the northern shores lie the Îles des Tifs (Hair Islands) and the Archipel de l’Épi (Epidermis Archipelago). A last group of islands are west off the Moustache Range, the Archipel des Poils (Hair Archipelago).

The map contains some – confusing – hints as to the location of Philippe Gonzalvez Island: the meridian dissecting the island is described as being 360 degrees west of Gr. (presumably Greenwich), which would place it… in Greenwich (as 360 degrees is a complete circle). The ferry lines departing from the unnamed port city on the island’s north lead to Biarritz, on France’s southern Atlantic shore (23 hours), Marseille, on France’s Mediterranean shore (14 hours) and Ailleurs (‘Elsewhere’; 1 hour).

Many thanks to Mr. Gonzalvez for sending in this map.