India harbors a planet’s worth of diversity. Rare are the unifying symbols in a country shared by over a billion inhabitants, professing myriad religions, speaking over 1,000 languages. One of these symbols is Mohandas Karamchand Gandhi, revered as the Mahatma (or “Great Soul”).

For Gandhi is more than India’s Founding Father; his method of non-violent resistance against the British colonial power meant that India’s eventual independence – although marred by the violent trauma of Pakistan’s separation – also was a moral victory. His example provided inspiration to subsequent emancipation movements, such as the Civil Rights movement in the US. Gandhi (b. 1869 in Gujarat) was assassinated in 1948, immediately after independence.

This stamp was issued by India in the year 2000, showing Gandhi’s flowing cape taking on the shape of India. Gandhi, a firm believer in self-reliance as well as non-violence, would have spun that cape himself. His choice of mass weaving an act of non-violent resistance wasn’t as curious as it seems: it required discipline, involved women and inspired his countrymen and -women to spurn British-made textiles.

Gandhi’s birthday, October 2, is celebrated worldwide as International Day of Non-Violence. How about holding that thought for the other 364 days? 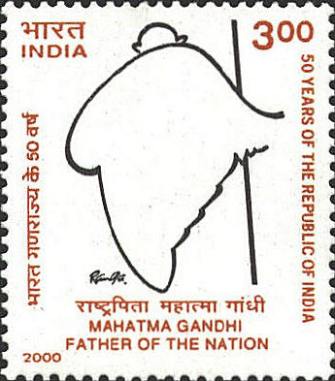 This map was sent in by Pranay Manocha. Thanks!

Related
Starts With A Bang
Ask Ethan: Do my atoms really “touch” each other?
When you bring two fingers together, you can feel them “touch” each other. But are your atoms really touching, and if so, how?
13.8
Why the origin of life and the Universe itself might be forever unknowable
There might be a hard limit to our knowledge of the Universe.
Hard Science
200 years of exploring Antarctica
What we’ve learning from the world’s coldest, most forbidding, and most peaceful continent.
Sponsored
4 misleading personal finance tips
Personal finance advice is often over-simplified and fails to consider economic research or people’s unique circumstances.
Strange Maps
Europe’s stunning digital divide, in one map
Some Europeans really don’t want to use the internet.
Up Next
Strange Maps
West Virginia, Home of the Slaw Dog
“If you have to ask for slaw on a hot dog, it’s not a true West Virginia hot dog”