“When an English speaker doesn’t understand a word of what someone says, he or she states that it’s ‘Greek to me’. When a Hebrew speaker encounters this difficulty, it ‘sounds like Chinese’. I’ve been told the Korean equivalent is ‘sounds like Hebrew’,” says Yuval Pinter (here on the excellent Languagelog).

Which begs the question: “Has there been a study of this phrase phenomenon, relating different languages on some kind of Directed Graph?” Well apparently there has, even if only perfunctorily, and the result is this cartogram.

When a Hellenophone has trouble understanding something, his or her preferred languages of reference, as far as incomprehension is concerned, are Arabic and Chinese. And while for Arabs the proverbial unintelligible language is Hindi, for Chinese it’s… the language of Heaven.

For Romanians, the ultimate in incomprehensibility is Turkish, for the Turks its French and the French consider Javanese the acme in huh?

But it is Chinese that, according to this cartogram, is the incomprehensible lingo of (p)reference for almost a dozen other languages, from Greek and Polish to Dutch and Lithuanian. Spanish, Hebrew and Greek are also quite popular, understandably so in the case of the latter two languages (isolate, relatively small languages) but more inexplicably so in the case of Spanish – a world language in its own right.

Which begs the fundamental question: why is language X considered the summit of incomprehension by language Y? Doesn’t that at least require some passing knowledge (or to be more precise, an awareness of the existence) by Y of X?

Mutual incomprehension results from the right mixture of inter-lingual proximity and unintelligibility. In the Middle Ages, for example, when the monks’ knowledge of Greek was waning, they would write in the margin of texts they could not translate, in Latin: “Graecum est, non legitur” (“This is Greek to me, I can’t read it”).

Greek, an elite language even in Roman times(1), has remained the West’s most popular shorthand for gobbledygook throughout the time of Shakespeare, who coined the original expression “it was Greek to me” (in Julius Caesar, Act I, Scene II). 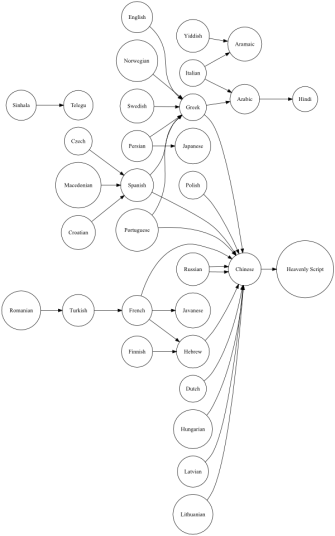 In the comments section of Languagelog are listed a few examples of such close/distant language incomprehension pairs: