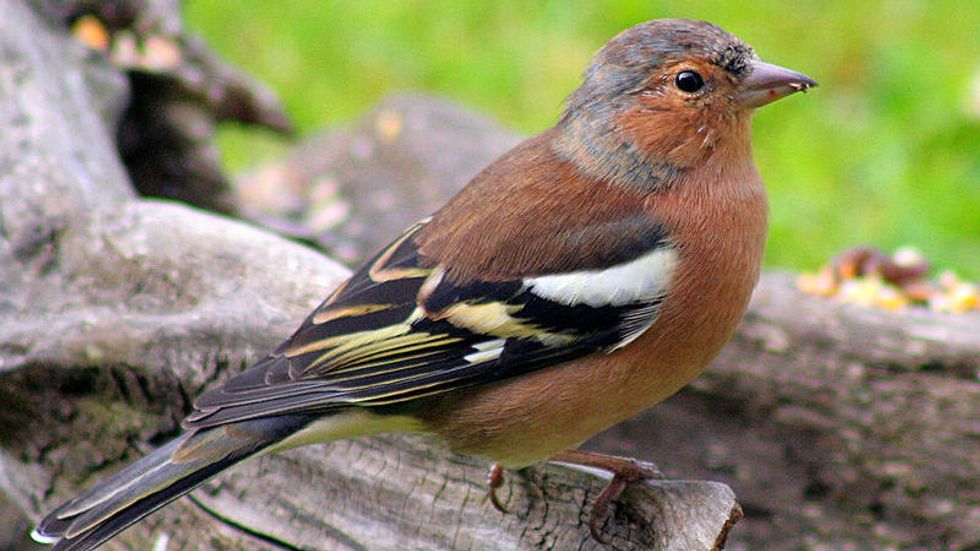 Chaffinch Map of Scotland is a poem written in 1965 by Edwin Morgan (1920-2010), Poet Laureate of Glasgow for 1999 and Scotland’s first National Poet (1). The work looks deceptively simple; in fact, it is a cleverly multilayered combination of poetry, cartography, ornithology, linguistics, and maybe just a hint of Scottish nationalism (2).

The chaffinch (3), or spink, is a small songbird of the Fringillidae family, and can be distinguished by its greenish rump and white bars on its wings (the male additionally by its blue-grey cap and reddish belly). This most common of European finch species is noted for its powerful and typical song. Chaffinches have an innate ability to sing, but also adapt to the songs of ‘teachers’ in their vicinity. This explains the curious incidence of regional variation in their song, a trait their song shares with human speech.

This poem is a map of Scotland, or at least those areas in Scotland where the chaffinch is endemic. It shows the different names used in Scottish dialects for chaffinch, varying from chaffinch in the north over shielyfaw in the middle to britchie in the south.

It is interesting to note that the generic term finch is an onomatopoeia, raising the intriguing possibility that the regional variation in human dialect terms for chaffinch somehow mimicks the dialects in the birdsong itself. Which conjures up the fairy-tale notion of animals (i.c. birds) initiating humans in the secrets of language.

Many thanks to Raynor Ganan for sending me a link to the page in his Ragbag. Chaffinch image by John Haslam (CC BY 2.0)

(1) also called Makar, i.e. ‘maker’, after mediaeval antecedents. Morgan was the first Scots Makar appointed by the Scottish Parliament; he was succeeded in 2011 by Liz Lochhead, and she was followed by Jackie Kay, appointed in 2016.

(3) that’s Fringilla coelebs, if you prefer to speak Linnaean.