The tiny, obscure alpine principality of Liechtenstein seems to exist as mainly a repository of arcane distinctions:

Another distinction is visible only when seeing a map of the borders of Liechtenstein’s Gemeinden (communes) such as this one. Liechtenstein as a whole has an unremarkable teardrop shape, but the subnational entities are fragmented to such an extent that, internally, Liechtenstein looks like a crazy patchwork quilt. It must be the most exclave-rich country in the world, at least relative to the rather small number of subnational entities.

I use the word ‘exclave’ instead of the more currently used term ‘enclave’. The meanings of these terms overlap, but only partially (1). And the distinction is particularly clear in these cases.

While many of these Liechtensteinian fragments might be considered exclaves, most also border more than one other territory, and consequently only three can be considered enclaves (which are totally surrounded by only one other territory): the communes of Schaan and Planken each contain an enclave of each other within their main territory (each enclave in this case naturally also being an exclave), Schaan also containing an enclave of Vaduz (which, from the point of view of Vaduz, is an exclave, of course). 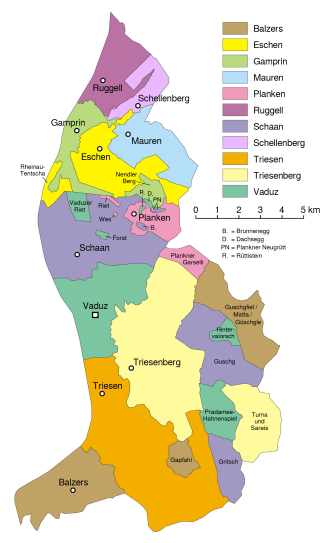 This map found in the Atlas of Liechtenstein at Wikimedia Commons.

(1) Map nerd alert: When the distinction between enclave and exclave is less important or not relevant, imprecision can be avoided by syncopating either term to ‘clave.

You might think it’s impossible to run out of wind, but Europe’s “wind drought” proves otherwise. And it’s only going to get worse.
Up Next
Strange Maps