“Fantasy is like fruit and dessert, and reality is like meat and potatoes and green beans,” says Renaldo Kuhler. The 76-year-old artist is speaking in a recent documentary about his work. Kuhler had a lifelong career as a graphic illustrator, earning a living rather than a reputation. But the unillustrious illustrator,  sporting the long, white beard of unheeded prophets and out-of-fashion philosophers, had another career, a brilliant and secret one.

Since his teens, Kuhler has been pouring all his private anguish and artistic energy in a project that has remained secret up until recently. That project is Rocaterrania, an imaginary country somewhere between the Adirondack Mountains in upstate New York and the St Lawrence River, on the border between the US and Canada.

The boredom and isolation of a youth spent on a ranch out in Colorado drove the young Kuhler to fill notebook after notebook with illuminations of his own private country. Despite its slightly latinate name, Rocaterrania was founded by Eastern European immigrants (Kuhler himself is the son of a German immigrant). And despite the somewhat saccharine appellation reminiscent of Ruritania, Kuhler’s country is all but peaceful, prosperous and quiet.

Reflecting his own inner turmoil, Rocaterrania experienced revolutions aplenty, suffering under the successive rule of presidents, dictators and czars. Many figures are as stark and tragic as any in a Dostoevsky novel. And then some. Like that female ruler who went around the streets, catching urchins to castrate them.

“Each person is a nation unto himself, and what he does with that nation is up to him,” Kuhler explains in the documentary, which offers an intriguing glimpse into the grim fairytale he constructed in the far reaches of his imagination.

It’s no wonder Kuhler was reluctant to publicise the existence of his troubled ‘inner country’. But it is a shame – the illustrations of the people and places in Rocaterrania look fantastic. And in any case, now there’s the feature-length film, also called Rocaterrania, by documentary-maker Brett Ingram. 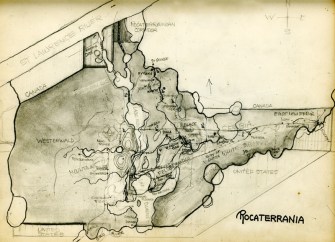 This map shows the location of Rocaterrania on the St Lawrence River, and its borders with the US and Canada. Multicultural Rocaterrania possesses a corridor to the river, in which is located the town of Katerin Shtot (sounds Yiddish, or at least looks like it because of the phonetic spelling). A large, uninhabited area to the west is called Westerwald (German). A town on the east bank of Lago Eldorado (Spanish) is the town of Novo Tyumen (Russian), on its west bank is Biala (which sounds more Polish), and further west are places called Serbia, East New Serbia and Black New Serbia.

Rocaterrania as a New-World dystopia with an Eastern European flavour: this is somewhat reminiscent both of The Yiddish Policemen’s Union (Michael Chabon’s allohistorical detective novel set in an Alaskan homeland for the Jews) and of The Jew of New York (a graphic novel by Ben Katchor about a real-life, failed attempt to found a Jewish utopia in… upstate New York).

Many thanks to Brett Ingram for providing me with this map of Rocaterrania. And many thanks to Jonathan Zuber for putting me on the trail of this wonderful country. More information on Rocaterrania, the documentary here on Mr Ingram’s website (here‘s a link straight to the trailer).

(Illustration by Renaldo G. Kuhler. Used with permission from the Collection of Brett Ingram)