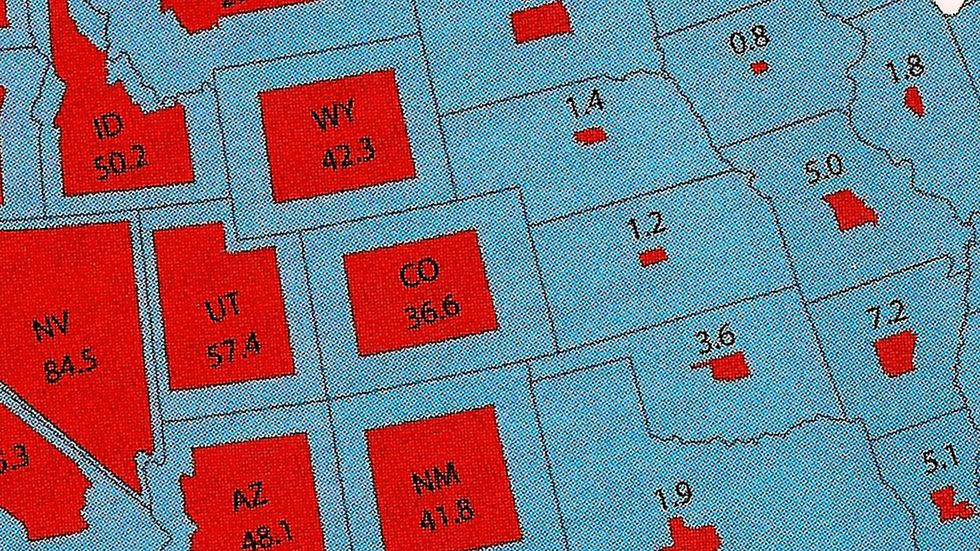 Let's start with the most obvious answer: the map is stunningly effective at bringing home its message. And that message is: Federal land ownership out west is huge.

Few minds will stir when they learn that the US federal government owns a grand total of 640 million acres of land: that figure is so vast that it becomes meaningless [1]. The sum of all that acreage adds up to about 28% of the nation's total surface, 2.27 billion acres. That sounds like a lot, but since it is an average, and because we have nothing to compare it to, that percentage is, to use one of my favorite quotes, “the kind of information they conceal in books” [2].

Back east, but even in the Midwest, those icons – colored red for better contrast – barely amount to a distant mirror of the state they're modelled on. In those parts, the federal share of state territory rarely runs into the double digits. It even stays below 2% for the Top 10 states with the lowest percentage of federally owned land:

The largest splotches of red are all in the 11 westernmost states of the Lower 48. The federal government's enormous share of Alaska is only less obvious because as usual the largest state in the Union is shown in an inset map, at a much larger scale [3].

These red icons look like parasites, about to take over the body of the host. Take a look at poor Nevada, where non-public land is pushed out to a narrow band skirting the state's borders – marginalized, in the most literal sense of the word. Even in most other western states, that ledge is not much wider than a toehold.

Both because of its enormous total size and its huge percentage of federal lands, Alaska alone represents almost half the government-owned area in the 10 most 'federalised' states combined. The only two western states falling out of the Top 10 are Montana (29.9%) and Washington state (30.3%).

But the federal government's extra-extra-large involvement in the management of western lands is far more than a conflict about grazing, water, mining, logging and other development. It pits the principle of good stewardship of the land, for the welfare of present and future generations, against one of America's foundational axioms: That government is best which governs least [7].

Two quotes from the story's comments section illustrate the gap between the two extremes:

“It's too late [to take back our country]. Jump ship and buy land in a poor undeveloped country, Start a farm and build a new community.”

[3] Contrary to intuition, map objects shrunk to fit in with others are shown at a larger, not a smaller scale. See the scales at the bottom: Alaska's 500-mile line is 4 times shorter than the Lower 48's. Meaning (a) that Alaska is shown 4 times smaller than the Lower 48; and (b) that if Alaska's scale would have been as long as the other, it would have measured 2,000 miles – i.e. would measure a larger distance.

[6] The sentiment is often attributed to Jefferson, but the quote as such is from the opening lines of Henry David Thoreau's Civil Disobedience.

[7] Mr. Bundy refused to pay $1.2 million in grazing fees to the BLM, arguing that the land his cattle uses belongs not to the federal, but the state government. In the spring of last year, BLM officials agreed to leave his property and release his cattle after hundreds of armed supporters showed up at the Bundy ranch. As the Washington Post recently reported, the conflict remains unresolved.