Russell Stutler is an American artist living in Tokyo; his website showcases, among other examples of his graphic art, this ink and pen floorplan of 221B Baker Street in London, one of the best-known fictional addresses of all time – as it is the residence of literature’s most famous detective, Sherlock Holmes. The floorplan was “drawn from notes taken while reading all 60 Sherlock Holmes stories twice in a row. If it appears in the books, it appears in this drawing,” says Mr Stutler.

Baker Street, in Westminster’s Marylebone district, these days is a busy thoroughfare, more prosaically known as the A41.  When you exit the Baker Street Tube station – the first underground station in the world, by the way – you can’t miss the larger-than-life  bronze statue of the street’s best-known resident. But Sherlock wasn’t the only fictional figure to live on Baker Street: so did James Bond, DangerMouse, Sexton Blake (the “poor man’s Sherlock Holmes”) and Dusty Springfield (okay, she’s not fictional). Mme Tussaud’s waxworks museum had been a fixture on Baker Street from 1835 to 1884, and is now located on Marylebone Road, just around the corner. 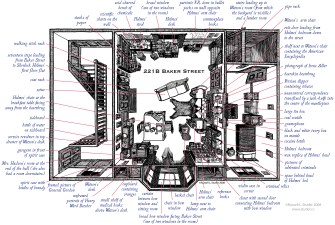 Holmes, created by Arthur Conan Doyle, was located by the author in an upstairs apartment of one of Baker Street’s then very high-class residences. In Doyle’s day, the street numbers on Baker Street only went up to 100, which probably explains why he chose 221B – to fictionalise Holmes’s address. More recently, the number 221 has been assigned (among others) to an art deco building housing, until 2002, the Abbey National building society.The company had to hire a ‘secretary to Mr Holmes’ to deal with all the incoming mail addressed to Doyle’s intrepid detective. A bronze plaque at the building’s facade details Holmes’ and Watson’s moving in to 221B.

And yet, the ‘true’ location of the detective’s residence remains a matter of dispute among hardcore Holmesologists. For Baker Street also houses a Sherlock Holmes Museum (officially at number 239, but displaying ‘221B’) in a  Georgian house similar to the one Holmes would have occupied. Holmes’s mail is now delivered to the museum instead of at number 221. A third version of the Holmes residence is in the upstairs floor of the Sherlock Holmes Pub, on Northumberland Street near the Charing Cross station. The BBC series Sherlock, the detective’s most recent incarnation, uses the exterior of 187 North Gower Street, about a mile east of the Sherlock Holmes Museum, as a stand-in for 221B Baker Street.

Mr Stutler’s floorplan may be the truest rendering of the pipe-smoking, fact-deducing detective’s residence: after all, it is as fictional as its occupant, and was constructed from all the relevant data in Doyle’s stories.

A number of 221B Baker Street maps (both annotated and non-annotated) may be found on this page of Mr Stutler’s website.