Homer (not the slouch of Springfield but the Greek poet) was seen by Strabo and the Stoics as the father of geography. His overarching geographic concept was of the world as a flat, round disk of land, completely encircled by Okeanos, the world sea.

All this was enclosed by the fixed dome of the Heavens, filled with cloud and mist close to the Earth, but with clear aether closer to the sky’s dome. Sun, Moon and stars rose from the eastern waters of the Ocean, moved along the dome and sank again into the western waters. The whole thing is reminiscent of nothing so much as of one of those snowdomes that are the staple of any self-respecting tourist trap.

This vision is expounded in the Iliad, in which Homer uses Achilles’ shield, forged by Hephaestos, to metaphorically describe the universe as a circular island, surrounded by water. Human activities, celestial objects and stellar motions are described on the shield, which is actually a map, on the threshold between a purely mythological and an nascent scientific view of the world. 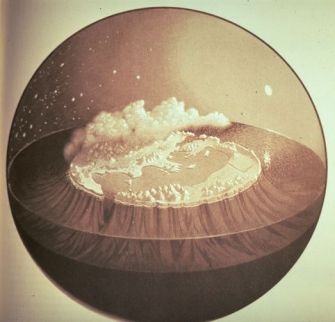 Homer’s world vision is almost certainly meant to be symbolic rather than realistic – no ships are sailing on the all-encircling sea, which is intended to emphasise the unity of the Oikoumenè, the whole inhabited world. But this vision is based on real geographical knowledge, and shows the Greeks of the eighth century BC had a good grasp of the layout eastern Mediterranean – Homer’s Iliad and especially his Odyssey are replete with references to routes and places, both real and imagined (or at least not yet identified).