In the Democratic primaries, Paul Tsongas leads the field of candidates. Bill Clinton (dubbed ‘Pander Bear’ by Tsongas) still has to earn the moniker ‘The Comeback Kid’ in the New Hampshire primary that would save his candidacy. Slovenia and Croatia break away from Yugoslavia, setting in motion events that will lead to all-out war on the Balkans. In the small Dutch town of Maastricht, European leaders sign the treaty that will transform the European Economic Community into a much more political European Union.

Another event from early 1992 that still reverberates today: On January 10, a container holding almost 29,000 plastic bath toys spills off a cargo ship into the middle of the Pacific Ocean and breaks open. The unsinkable toys, which were en route from Hong Kong to Tacoma (Washington), include a lot of iconic yellow rubber ducks that have since been caught up in the world’s ocean currents and continue turning up on the most improbable shores. Curtis Ebbesmeyer, a retired oceanographer, saw from the beginning how valuable the rubber duckies could be in tracing ocean currents, and correctly predicted their trip through the Northwest Passage. 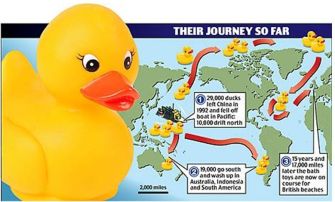 The toys, or ‘Friendly Floatees’, as they became known, made their first landfall in mid November of 1992, when the counter-clockwise Subpolar Gyre started dumping the yellow rubber ducks (and blue turtles, red beavers and green frogs) on Alaskan shores. It took the ducks about three years to drift full circle on the Gyre – scientists calculate they drift 50% faster than the water in the current itself.  They turned up all over the Pacific: Japan, Hawaii, North America and Australia.

As Ebbesmeyer predicted, some ducks escaped the Gyre to flow North through the Bering Strait into the Arctic. Between 1995 and 2000, they slowly drift eastward, frozen in the arctic ice, at a rate of 1 mile per day. In the new millennium, the ducks started reaching the North Atlantic, being sighted from the shores of Maine to Massachusetts.  In 2001, the ducks reached the site where the Titanic sank. In 2003, the plastic toys reached the shores of the Hebrides, off the coast of Scotland. This article in the Daily Mail predicted their arrival on the shores of southwestern England in 2007.

If you spot one of these plastic toys on a beach, its colors probably faded by now, with the imprint ‘The Early Years’, then you’ve found one member of the plastic armada that set sail a quarter of a century ago. At some point, the scientific team that tracked their progress offered $100 apiece for the ducks – provided you could tell them when and where you’d found them. The offer was valid only from July through to December 2003, and only for Friendly Floatees found in New England, Canada or Iceland. However, friendly Floatees have become so famous that they can fetch up to $1,000 at auction.

Thanks to Marina for sending in this delightful story, and this map. Wikipedia provides this map of the Friendly Floatees’ journey: 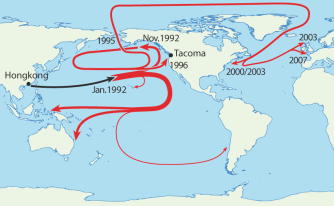