“Hitler has often protested that his plans for conquest do not extend across the Atlantic Ocean. I have in my possession a secret map, made in Germany by Hitler’s government – by the planners of the new world order. It is a map of South America and a part of Central America as Hitler proposes to reorganize it,” revealed US President Franklin D. Roosevelt in his Navy Day address to the nation, broadcast on 27 October 1941.

The map, however, was a fake. World War II revisionists (not to put too fine a point on it: those who would have preferred the Nazis to win) claim this proves that FDR was a war-mongerer, prepared to lie shamelessly in order to drag the US into war. But in this case, FDR might have been more mongered against than mongering – the map most probably was a British forgery, not an American one. 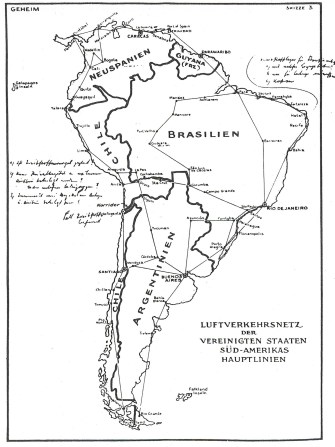 While FDR indeed was a steadfast advocate for a more active US role in the unfolding conflict, he was up against formidable internal resistance to entry into war. It was the British who had more to gain from American involvement, because they had everything to lose. In this phase of the conflict, Britain stood virtually alone, Nazi Germany controlling most of the European continent and kicking Soviet butt in the early months of Operation Barbarossa, the German invasion of the Soviet Union. The US would only be dragged into the war after the Japanese attack on Pearl Harbor, later that same year, on December 7.

For Britain, desperate times called for desperate measures, one of which would have been the forgery of this map, the point of which was to instil in the Americans the notion that the Nazis, if victorious in Europe, would not leave the American continent alone, thus challenging the Monroe Doctrine. The story behind the map, as (probably, but not provably) produced by the British intelligence services, went like this:

In October 1941, a British agent managed to snatch this map from the bag of a German courier straight after the latter’s involvement in a car crash in Buenos Aires. The map showed how the Nazis intended to reorganise South America into five satellite states, each one a Gau with a German Gauleiter:

Interestingly, the map’s legend stresses: Luftverkehrsnetz der Vereinigten Staaten Süd-Amerikas – Hauptlinien. (‘Air Routes in the United States of South America – Main Lines’), indicating that these states would be joined in a well-connected subcontinent-wide political union (most likely a Nazi-induced shotgun wedding). Such a unified behemoth under German control would inevitably pose a threat to the US, FDR proposed in his Navy Day speech: “This map makes clear the Nazi design, not only against South America but against the United States as well.”

As it turned out, World War II hardly touched South America. Only after the war did it gain some notoriety as the hideout of many top-level Nazis, including Eichmann (caught by the Israelis in Argentina) and Mengele (died peacefully in Brazil).

This map was sent in by Joseph Eros, who copied it from the article ‘FDR and the Secret Map’ by John F. Fratzel and Leslie B. Trout Jr. in the 1985 New Year’s edition of Wilson Quarterly.

Related
The Present
How heat pumps of the 1800s are becoming the technology of the future
Innovative thinking has done away with problems that long dogged the electric devices — and both scientists and environmentalists are excited about the possibilities.
Starts With A Bang
JWST’s hunt for most distant galaxies gets double boost
Along with gravitational lensing and ALMA’s incredible long-wavelength spectroscopy, JWST is reshaping our view of the early Universe.
Thinking
Finding your essential self: the ancient philosophy of Zhuangzi explained
Adopting a healthy scepticism towards inherited ideas means “emptying the container of the Self.”
The Future
Startup’s bladeless flying car is designed to reach Mach 0.8
One of Jetoptera’s VTOLs is expected to reach speeds of around 614 mph, about as fast as a commercial jet airliner.
Health
New blood types are often discovered following medical disasters
New blood types are regularly discovered by an unusual absence or an unusual presence — both of which can result in tragedy.
Up Next
Strange Maps
South of No North: Country Music’s Favourite States
Texas and Tennessee are the two states most mentioned in country lyrics