The book Limits of Language by Swedish linguist Mikael Parkvall is a sort of languages-only Guinness Book of Records, listing everything that’s large, small and otherwise interesting about the manifold manners of human speech and associated forms of communication. One item deals with the world’s most linguistically diverse countries, and is illustrated with this map, of the world’s ‘linguistic superpowers’. The caption reads:

“Languages are very unevenly distributed among the countries of the world. The map tries to capture this fact by rendering each country in a size corresponding to the number of languages spoken in it. (Because of the inherent problems in accomplishing this, sizes are rather approximate). The ten shaded countries are those in which more than 200 languages are in use.”

The Ethnologue, cited a bit further, only lists 9 countries with more than 200 languages, however. Here are the 12 top countries:

It’s curious how the linguistically most diverse country in the world is Papua New Guinea – because it’s also the place with the biggest biodiversity anywhere, one of the last places in the world where new species get discovered regularly. Could there be a single explanation for both phenomena? 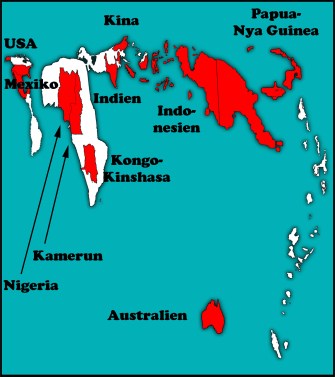 I was alerted to this map by Bjørn A. Bojesen; Mr Parkvall himself was kind enough to provide me with this map. Here’s a link to his book on Amazon, warmly recommended for anyone both language- and trivia-obsessed.

A Map of Greater China, Made in Taiwan

Taiwan – officially: the Republic of China – claims territories of ten of China’s neighbours