After their defeat by Mao Zedong’s communists in 1949, the Chinese nationalist Kuomintang party withdrew to Taiwan, a small island off the coast of mainland China, roughly halfway between Hong Kong and Shanghai. Almost seventy years later, the Taiwanese government still maintains it is the rightful government for all of China, not the communists on the mainland. Its official name isn’t even Taiwan, but Republic of China (RoC).

That has become an increasingly hollow fiction over the years. Most UN members have switched recognition to the mainland government, officially the People’s Republic of China (PRC). This leaves Taiwan a.k.a. the RoC – no longer even a member of the UN – in a sort of existential limbo. Concurrently, the animus for declaring independence is growing in Taiwan, a move strongly discouraged by the communist government in Beijing, who are also keen to maintain the fiction of territorial unity between the island and the mainland… with of course their government being the rightful one, also for Taiwan.

The length and breadth of that fiction can’t be illustrated any better than by this map, detailing the territorial claims of the RoC on the mainland. These revanchist claims are truly spectacular: not only do they include all the area presently under the control of the communist regime, but also many outlying areas controlled by China’s neighbours. The uproar over these claims would be much greater if Taiwan were in a position to actually (re)take these areas: 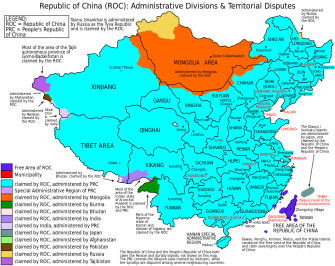 In all, the RoC claims territory from no less than ten countries, including of course all the territory of its nemesis, the PRC. The sovereignty fiction is completed by labelling the area under Taipei’s control (Taiwan, but also some smaller islands – some quite close to the mainland) the ‘free area of the Republic of China’, Taipei its ‘Provisional capital’ and Nanking (on the mainland) its ‘Official capital’. Special mention should be made of the Diaoyu islands (Senkaku islands in Japanese), which are claimed both by the People’s Republic of China (PRC) and by the Republic of China (RoC) but are in fact administered by Japan, proving the old dictum that when two dogs fight over a bone, it’s often the third dog that runs off with it.

This map, found here on Wikipedia, was sent in by John Halton, who comments: “From what I understand, the RoC can’t actually drop these claims, however unrealistic they may now be. To do so would be interpreted by the PRC as tantamount to a declaration of independence, which the PRC would regard as an act of war”.