No flat world map can do our three-dimensional globe justice. So why not go the whole hog and produce a without any pretense to topographic accuracy? This ‘equinational projection’ goes where no Mercator or Peters projection ever went, and shows a world in which every country is the same size. A world which is a little different from ours. 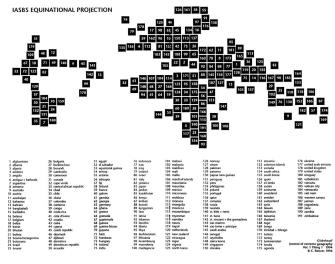 Unfortunately, ‘Globehead! Journal of Extreme Cartography’ was a rather short-lived grad school magazine at Penn State (only 2 issues), otherwise we might have seen some more strange maps like this one.

“The equinational projection was invented by my friend Catherine Reeves for Globehead! in 1994,” writes Jeremy W. Crampton, professor of Geography at the University of Kentucky, who sent this map in. He kindly explains the cryptic acronym IASBS: International Association for the Study of Big Science.