It’s the year 2053, and the world looks very different from today. There are no more than 5 superstates left on the face of the planet:

• an American Federation, covering the whole of North and South America;

• an Indian Confederation, consisting of present-day India and Birma/Myanmar (Bangladesh seems to have disappeared under the sea);

All states except the Russian Empire own a slice of Antarctica (I suppose that in exchange, Russia rules the North Pole all by itself).

That’s the thesis of Third Empire, a futuristic novel by Mikhail Yuryev first published in . In the book, Yuryev predicts that the Russian Empire will be re-created in a few decades’ time. This ‘Third Empire’ (I presume Tsarist Russia and the Soviet Union were the first and second) will obliterate the three Baltic states in 2015 and defeat the USA in the nuclear exchange that many feared for most of the second half of the twentieth century but was thought unthinkable after the end of the Cold War in the 1990s. 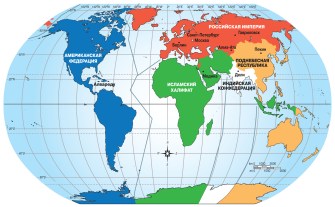 Mikhail Yuryev is a Russian businessman, the former chairman of the Russian Government’s Council on Economy and Entrepreneurship (1993-1995) and formerly a deputy speaker of the State Duma (1995-1999). He is an ultranationalist, hoping to create a strong Russia which bases itself on Christian Orthodox values. Some quotes from an article by Yuryev, titled “Identifying Russia’s Foes” and published on 6 November 2004 in the Komsomolskaya Pravda, may elucidate his stance:

“Russia is a great state and must remain as such. This means that our existence as Russians inside Russia, not as nationals of a different country living in this country, however affluent and free it may be, is a value of the highest order.”

“Developing and consolidating the Russian nation and Orthodoxy, and fostering their interests, which in fact are one and the same thing, constitute the major goal for Russia. It has greater significance for us than the interests of other peoples, or religions in Russia.”

“Russia must retain the status of an imperial country.”

“Russia must be a common home to all Russians who live here and abroad; the conditions of our compatriots in other countries is our concern.”

“The people who allege that Western countries and monetary funds of various colors offer the only right methods for building Russia’s national economy and policies are foes.”

“Those who insist that the state has no right to introduce the basics of religion into school curricula on the basis of Orthodox teaching are foes.”

It may be small wonder, then, that a reader of the online edition of The Times of London – not coincidentally from one of the Baltic republics – on May 16, 2007 replied thus to an article about Russia’s Einzelgang in foreign policy matters:

“Just a couple of months ago, a former vice-chancellor of the Russian Duma Mikhail Yuryev published a best-selling novel “The Third Empire.” (…) The present advisor to president Putin, Alexander Dugin, states on the back-cover of the book: ‘This is Russia that one should kill and die for’. It is clear to anyone who lives near the border of this former bloody empire that we are dealing with the real sentiments and attempts at the resurrection of the ‘Third Russian Reich’ . So please don’t tell the Balts about forgetting ‘their historical garbage’. Putin’s Russia is a threat to all the democratic world.”

Ancient humans may have evolved to slumber efficiently — and in a crowd.
Up Next
Strange Maps