174 - The Nine Nations of North America 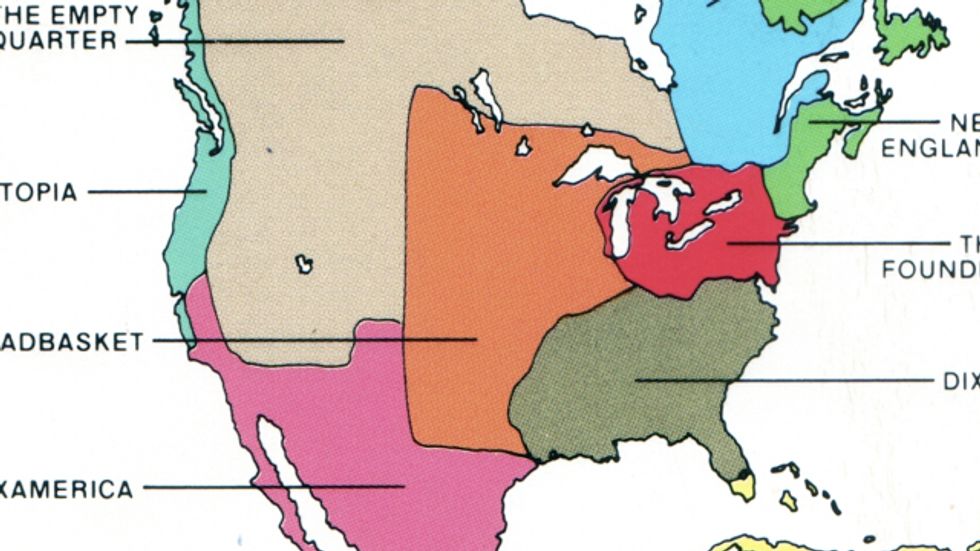 Forget about the United States of America, forget about Canada and about Mexico. North America might be divided into these three states, but the northern half of the American continent is actually made up of nine nations. Those weren’t on any map until 1981, when Joel Garreau published ‘The Nine Nations of North America’.

In this book, Garreau argued that those nine regions demonstrate such distinctive cultural and/or economic features, that they are a more relevant way of dissecting North America than the traditional (Canadian) provinces and (US and Mexican) states. Those Nine Nations are:

• The Foundry: the (formerly) industrial heartland of North America, covering the US and Canadian sides of the Great Lakes region and including much of the US northeast. Capital: Detroit.

• Dixie: The cultural area more or less corresponding with the secessionist Confederate States of America (1861-1865), but for example excluding western Texas, the southern tip of Florida and including southern Missouri, Illinois and Indiana and southeastern Oklahoma (known as ‘Little Dixie’). Capital: Atlanta.

• The Breadbasket: includes most of the Great Plains states (in the US) and part of the Prairie provinces (in Canada). To wit: Iowa, Kansas, Minnesota, Nebraska, North and South Dakota, Oklahoma, parts of Missouri, Wisconsin, Colorado, Illinois, Indiana and Texas; and on the Canadian side parts of Ontario, Saskatchewan and Manitoba. Capital: Kansas City.

• The Islands: basically a federation of the Carribean – the islands and their people. I.e. also the Greater Miami area, heavily Cuban by now, and the Florida Keys. Could stretch all the way across the Caribbean Islands to include parts of Venezuela. Its capital would be Miami.

• Mexamerica: those areas in which ‘tex-mex’ culture is prominent, i.e. most of northern Mexico, and a large area in the south of the US – most of New Mexico and parts of California, Arizona and Texas. Its capital could either be Mexico City or Los Angeles. Some later maps include all of Mexico in this Nation.

• Ecotopia: A big chunk of coastal Northwest America, from Alaska via British Columbia through Washington State and Oregon to California. Capital: San Francisco.

• Québec: the only part of North America that is institutionally non-Anglophone. Capital of this French-speaking enclave would be Québec City.

• The Empty Quarter: All the other, sparsely populated areas of North America, from Northern Canada down to Utah. The name refers to the desert of the same name, occupying the lower third of the Arabian peninsula (Rub’ al-Khali in Arabic). Capital: Denver.

Garreau’s subdivision of the North American continent is the best-known example of what one might call bioregionalism or ‘ecoregionalism’. This term, first emerging in the 1970s, puts great value on the ‘politics of place’. Which means that the basis for policy and analysis are geographical areas, defined by their natural or cultural – but in any case ‘organic’ – boundaries (such as watersheds or prevalent type of industry).

It must be said that Garreau’s subdivision doesn’t necessarily correspond with other bioregionalisms, such as those in Cascadia (a bioregion covering parts of the US and Canadian Pacific coastal areas, but rarely as extensively as in Garreau’s Ecotopia) or Katuah (in the Southern Appalachians). Furthermore, as his ‘Nine Nations’ are by now more than 25 years old, it would be interesting to see whether they need updating – have their ‘contents’ or borders shifted?

Joel Garreau (°1948) currently works as journalist, editor (at the Washington Post) and policy wonk (at the School of Public Policy at George Mason University). His best-known work still is the ‘Nine Nations of North America’ (1981). His latest major book is ‘Radical Evolution’ (2005), describing the human race’s possible evolution, via emerging bio- and other technologies, into something post-human. Garreau maintains a website at www.garreau.com.

This map was suggested to me by many readers, among whom Steve Stackhouse, the stapler, paulbeard, LJ Faucher and James L. Erwin. I’ve held off publishing this map while I was on the lookout for an original map (i.e. on the cover of the book) with higher resolution than this one. But maybe this way somebody who has one might be prompted to send it in...

Update: thanks to Paul Attinello for the hi-res image!