I was alerted to these maps by a Turkish gentleman, who posts them on his website. They are a reaction to the map of the Middle East, re-drawn as it was in the July issue of the US Armed Forces Journal(mentioned earlier in this blog). This American vision has upset a lot of people in the Middle East, not in the least in Turkey, which, in that American scenario, would lose about a quarter of its current territory in the East to a Free Kurdistan.

Unfortunately, my Turkish is not very good, so I can’t read the text explaining the map-drawing competition. The caption above the maps is, however, clear: Divided States of America in, United States of America out. Some maps are funny, others are a bit grim, but every map speaks volumes about the ‘hearts and minds’ the current US administration has lost, around the world and particularly in the Middle East.

Here is a selection, taken from Açik Kistihbarat‘s site. 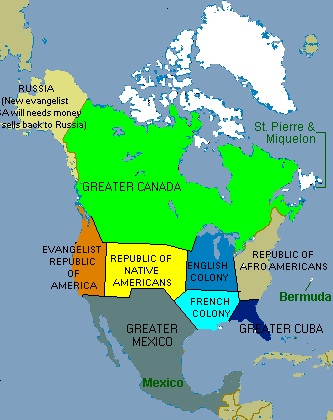 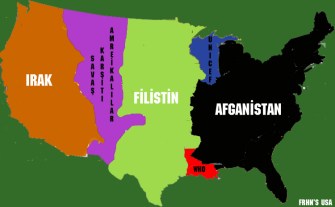 The three countries most affected by American foreign policy get a big slice of the US, Iraq occupying the West Coast, Afghanistan the eastern part up to the Mississippi, Palestine most of what’s in between. A purple sliver between Iraq and Palestine is reserved for something I can’t translate. Bizarrely, two UN institutions get Louisiana (WHO) and Wisconsin and some of Michigan (Unicef).