The Americas have the Mississippi and the Amazon, Africa has the Nile and Asia has the Ganges and the Mekong, among others. So why wouldn’t Australia have a large river system – or an inland sea?

Early surveyors of the unexplored centre and west of Australia, fanning out from the earlier settled east, kept on the lookout for Australia’s Amazon, or at least a large body of water, possibly connected to the outside ocean.

In 1827, former East India Company officer Thomas J. Maslen published this map of that inland sea in his book The Friend of Australia, which provided instructions for surveying and exploring the island-continent’s interior. 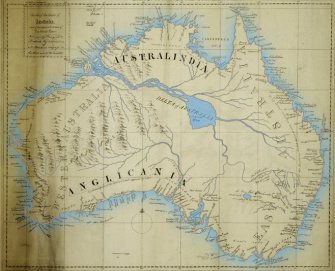 In retrospect, those instructions aren’t very useful; Maslen extrapolated the Macquarie and Castlereagh Rivers as headwaters of a huge river flowing across Australia into the Indian Ocean at Australia’s nort-west coast. This river separated a northern land-mass (labelled ‘Australindia’) from a southern one (named ‘Anglicana’).

It took a few more decades for the explorers to realise that Australia’s interior is extremely hot, dry, waterless and deadly. In the mid-nineteenth century, the ‘Dead Heart of Australia’ became part of the explorers’ and settlers’ vocabulary.

Map found here on a gorgeous blog called Bibliodyssey, devoted to “books, illustrations, science, history, visual materia obscura, eclectic bookart”, which includes some very curious maps, such as this one.