In 1905, count Alfred von Schlieffen, Chief of Staff of the German Army, developed a plan to win the impending war with France and Russia. In the time it would take Russia to mobilise, a swift campaign on the Western front would defeat France, allowing the troops to then be shipped to the Eastern front. Thus, a Blitzkrieg (‘lightning war’) in the West would prevent a ‘Zweifrontenkrieg’ (a war on two fronts) and ensure a German victory.

Shortly before the outbreak of the war in 1914, Schlieffen’s successor count Helmut von Moltke adapted the plan: German forces would attack France from the north and south, squeezing the French into submission and subsequently meeting at Paris. This adaptation required invading neutral Belgium, which as it turned out would result in Britain declaring war on Germany – upgrading what already was a big continental war into the First World War.

The Schlieffen Plan didn’t work as foreseen: the German offensive came to a standstill at the Marne, the Russians mobilised quicker than the Germans thought and invaded East Prussia. Germany’s Western offensive didn’t prove to be the ‘Blitzkrieg’ they thought it would be. The war ground to a halt and became a deadly stalemate for the next three years.

And yet, the Germans fought the Second World War broadly along the lines of the Schlieffen Plan. In 1940, the ‘Blitzkrieg’ did go according to plan: France and the Benelux were defeated in a matter of weeks – but the Eastern campaign proved disastrous, and All was less than Quiet on the Western front… perhaps proving the dictum that each war is fought with the tactics best suited for the previous one. Or something like that. 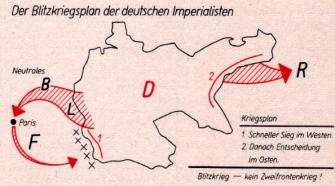