James Joyce once boasted that, should Dublin ever disappear off the face of the earth, the city could be refashioned from the references to it in ‘Ulysses’. The maker of this map did something similar: ‘Bruceville’ is New Jersey, reconstructed out of Bruce Springsteen’s lyrics.

Although one of his most famous albums was called ‘Nebraska’ (and one of his best-stelling singles was ‘Streets of Philadelphia’), Springsteen is a Jersey boy. The lyrics to his songs are peppered with references to the landscape of the Garden State. His New Jersey is populated by ominous darknesses, glittering fairgrounds, empty parking lots, pining sweethearts, blinding ad signs – a landscape usually observed from that most essential machine for American living, the car.

“I took month-long vacations in the stratosphere, you know it’s really hard to hold your breath.”

(sung in an East-European accent in ‘Growin’ Up’, a song on ‘Greetings From Asbury Park, NJ‘ Springsteen’s first album, 1973)

“He tried sellin’ his heart to the hard girls over on Easy Street / But they said, “Johnny, it falls apart so easy and you know hearts these days are cheap.”

Mansion on the Hill

“Tonight down here in Linden Town I watch the cars rushin’ by home from the mill / There’s a beautiful full moon rising above the mansion on the hill.”

Darkness On the Edge of Town

“I’ll be there on time and I’ll pay the cost / For wanting things that can only be found / In the darkness on the edge of town.”

The Parking Lot Outside the 7/11 Store

“She’s waiting tonight down in the parking lot / Outside the Seven-Eleven store.”

The Field Out Behind the Dynamo

“Baby, tie your hair back in a long white bow / Meet me in the fields behind the dynamo”

(from ‘Prove It All Night’, on ‘Darkness On the Edge of Town’)

(from the eponymous song, off ‘Darkness On the Edge of Town’)

The Part of Town Where When You Hit A Red Light, You Don’t Stop

Trouble Busing In From Outta State

“Now there’s trouble bustin’ in from outta state and the D.A. can’t get no relief / Gonna be a rumble out on the promenade and the gamblin’ commissions hangin’ on by the skin of its teeth”

(from the song ‘Atlantic City’, on ‘Nebraska’)

The Streets of A Runaway American Dream

(from ‘Born to Run’, off the eponymous album)

(from the song ‘Spirit In the Night’, off ‘Greetings From Asbury Park, NJ’)

“41 shots, and we’ll take that ride / ‘Cross this bloody river to the other side”

(from the song ‘American Skin (41 Shots)’, a song about the shooting dead by the NYPD of Amadou Diallo, an African immigrant. Featured on ‘Live in New York City’, 2002) 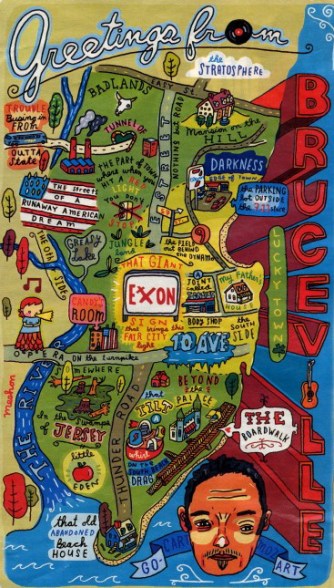 (from the eponymous song, on ‘Born to Run’)

That Giant Exxon Sign That Brings This Fair City Light

(from the song ‘Jungleland’ on the ‘Born to Run’ album)

“In Candy’s room, there are pictures of her heroes on the wall / But to get to Candy’s room, you gotta walk the darkness of Candy’s hall”

(From the song ‘Candy’s Room’, off the ‘Darkness On the Edge of Town’ album)

Opera On the Turnpike

“There’s an opera out on the Turnpike, there’s a ballet being fought outside the alley”

(from the song ‘Jungleland’ on ‘Born to Run’)

Somewhere In the Swamps Of Jersey

(from ‘Rosalita (Come Out Tonight)’, on The Wild, The Innocent, And The E Street Shuffle)

(from the eponymous song and album. In the liner notes, Springsteen calls this a “breakthrough song”, one that eventually led to ‘Nebraska’)

(from the eponymous song, opener of ‘Born to Run’. In the liner notes, Springsteen admits he stole the title from a film with Robert Mitchum)

(from the song ‘Angelyne’, written by Springsteen for Gary ‘US’ Bonds’ 1982 album ‘On the Line’, which Springsteen co-produced)

(from the eponymous song off ‘Nebraska’)

(from the song ‘Tenth Avenue Freeze-Out’, a.k.a. ‘Tenth Avenue’, off ‘Born to Run’. This song tells the story of Springsteen’s band’s formation; the Boss refers to himself as ‘Bad Scooter’)

“And them South Side sisters sure look pretty / The cripple on the corner cries out, “Nickels for your pity.” / Them downtown boys they sure talk gritty / It’s so hard to be a saint in the city”

(used in several songs, this reference to the South Side is from the song ‘It’s Hard To Be A Saint In the City’, off ‘Greetings From Asbury Park, NJ’)

(Springsteen refers to the boardwalk in several songs, including this one, known as ‘A Night Like This’, but a.k.a. ‘Angel Baby’, a.k.a. ‘Dance On Little Angel’)

That Tilt-A-Whirl On the South Beach Drag

“And me I’m tired working in this dusty old arcade and fixin’ these machines / Chasin’ them factory girls under the boardwalk where they unsnap their jeans / And you know that tilt-a-whirl down on the south beach drag / I got on it last night and my shirt got caught” (from the song ‘4th of July, Asbury Park’ a.k.a. ‘Sandy’, off ‘The Wild, The Innocent, And The E Street Shuffle’, 1973))

(title track of ‘Lucky Town’, Springsteen’s 1992 album that was co-released with ‘Human Touch’)

“Some silicone sister with her manager’s mister told me I got what it takes / She said I’ll turn you on sonny, to something strong if you play that song with the funky break / And go-cart Mozart was checkin’ out the weather chart to see if it was safe to go outside / And little Early-Pearly came in by her curly-wurly and asked me if I needed a ride.”

(from ‘Blinded By the Light’, off ‘Greetings From Asbury Park, NJ’)

This map was kindly provided by Gerry Canavan. As to its ultimate origin, unfortunately he can only add: “A friend of mine discovered it in her office when taking a faculty job at UNCG, where it was taped to a bookshelf. If I had to guess, I’d say it originated in Rolling Stone, though I can’t be sure.” Lyrics found at springsteenlyrics, the premier Lebanese Springsteen site.