This article is part of the Hope and Optimism initiative which explores the theoretical, empirical, and practical dimensions of hope, optimism, and related states.

Succeeding at school or university is about more than memorizing vast amounts of information and impressing professors with ingenious ideas. A growing body of scientific investigation now supports the conclusion that being hopeful has a distinctly positive effect on academic performance.

One paper from the University of Kansas looked at how the presence of hope boosted college achievement over a 6-year period, finding that ‘high-hope’ students had higher GPAs, and were more likely to graduate than ‘low-hope’ students.

A separate 3-year study by a team of British researchers has shown that hope is not only related to academic success, but is a greater predictor of success than intelligence tests, personality, or whether individuals previously did well in academic environments.

But what is hope? Recent studies have based their definition on positive psychologist Rick Snyder‘s theory developed in the 1990s. Snyder saw hope as a “cognitive process allowing individuals to plan for and execute the pursuit of goals.” 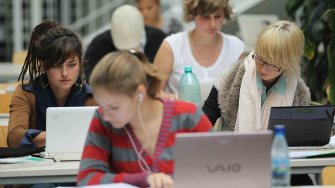 Students study with their laptop computers in the Pedagogical Library at the Freie Universitaet university on September 20, 2011 in Berlin, Germany. (Photo by Sean Gallup/Getty Images)

In a 1991 paper, Snyder outlined his theory as “a cognitive set that is based on a reciprocally-derived sense of successful agency (goal-directed determination) and pathways (planning to meet goals)”. In other words, it is essential for hope that a person feels he or she has agency — an ability to effectuate change — and pathways to achieve that change. If those conditions are met, motivation will drive a person to achieve set goals.

Thinking of hope in this way is important. Wanting to accomplish something is not enough. Goals must be pursued, and a sense of getting closer to them is crucial. Hope is preserves a goal-oriented approaches amid the vicissitudes of life.

According to researchers, if you don’t have hope, you are more likely to employ “mastery goals,” i.e. choosing simple, attainable tasks that aren’t challenging and don’t help you grow. Accomplishing mastery goals implies a lack of control over one’s environment, therefore making it easier to give up.

Even with these definitions, hope can be a somewhat fuzzy concept. For this reason, Snyder developed a “hope scale” to measure it in individuals, making it easier to conduct research into the subject.

A 2014 study by researchers at Santa Clara University, led by David B. Feldman, built on Snyder’s work by looking to distinguish between the role of hope and optimism on academic achievement. The paper concludes by saying that higher hope predicts a higher GPA. In fact, scientists found hope to be the most consistent predictor of GPA, beating out optimism. Why? It seems that being optimistic is general in nature. Optimism is an attitude towards life — present-oriented belief that everything will be okay — but not a specific goal-oriented approach.

Snyder understood optimism as the expectation of a positive outcome without regard for one’s own actions. Hope, on the other hand, assumes active participation in achieving goals through planning and motivation.

In an environment where you need to go after many objectives like writing papers, taking notes, preparing for tests, and putting plans into motion, being hopeful is a better bet for securing good grades than being merely optimistic.

The results of the Feldman study corroborates previous research by Indiana University scientists that showed hope was a better predictor of success, compared to optimism, among law school students.

On the other hand, there are certain ways that optimism can help students overall. The Indiana University researchers did find that optimism contributed towards greater life satisfaction at the end of the first semester.

Another study realized that optimism was directly related to social support in the first year of college. In this case, optimistic students were found to have larger friend networks, which provided them greater social support in a stressful environment.

One final positive effect of being optimistic in school is that it can help you stay there. This study from the University of Kentucky has shown a positive correlation between academic optimism and retention.

Because optimistic people tend to finish what they’ve started, rather than drop out, scientists are advocating the teaching of hope as an academic intervention.

OmnesViae is a modern route planner based on the roads of the Roman Empire.
The Well

Screens were around in previous generations, but now they truly define childhood.
Up Next
Starts With A Bang

The first woman in space turned 80, and you probably never heard of her