Does an apology from someone who offended you make you feel better? What if it was a whole country that wronged you and your people—what good would that do?

Would it make a difference if American leaders apologized to Vietnam for the costly war fought against it? Or if Saudi Arabia apologized to American citizens for giving financial support to the radical Islamic sects that would ultimately attack this country on 9/11/2001?

A recent study from Flinders University in Australia looked at what role collective apologies have on forgiveness. The researchers found that apologies can create the possibility of a more harmonious relationship but require the victim’s desire to reconcile. That’s when hope comes into that space and makes forgiveness possible.

In “On Apology”,Aaron Lazare defines apology as essentially a communication or gesture by the offender meant to signal that they take responsibility and feel remorseful for doing wrong. Apologies can offer a path towards repair and change. 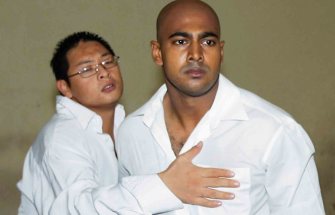 Andrew Chan holds Myuran Sukumaran in a holding cell at the Denpasar Courthouse before their repsective sentencing trials at Denpasar Court on February 14, 2006 in Denpasar, on the Indonesian resort island of Bali. The two Australian men were charged with heroin trafficking having been arrested in Bali last April. Both Chan and Sukumaran were today condemned to death by firing squad for their crimes. (Jason Childs/Getty Images)

Collective apologies have the potential to reduce the desire of victims for vengeance and make them more willing to deal with the offenders.

“The hope in turn motivates the victims’ own engagement in conciliatory efforts, including the willingness to forgive the offender group: letting go of hostile feelings, being willing to re-engage, and extending trust and benevolence to the outgroup,” write the researchers.

The team, led by Michael Wenzel, carried out three studies, involving international students. The first two, having, respectively, 84 and 405 university students, were concerned with Indonesia’s 2015 execution of two Australians, Andrew Chan and Myuran Sukumaran, who were found guilty of drug smuggling.

This event was deeply offensive to many Australians. The execution occurred despite protests and pleas by the Australian public, famous artists, politicians and officials. The fact that the voice of so many Australians was disregarded made them incensed by Indonesia’s actions. As a result Australia recalled its ambassador to Indonesia and boycotted travel to Bali. 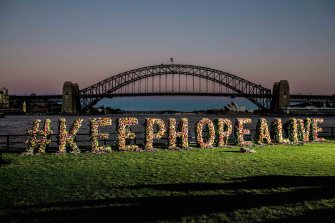 Amnesty international and Sydney Bali Nine activists hold a vigil in front of a flower wall that says ‘#keephopealive’ in a last ditch effort to sway the Indonesian Government to halt proceedings to execute Andrew Chan and Myuran Sukumaran on April 27, 2015 in Sydney, Australia. Chan is one of the nine Australians accused by Indonesian Police of drug trafficking on April 17, 2005. (Cole Bennetts/Getty Images)

The studies considered what kind of hypothetical apologies from the Indonesian government could create a reconciliation between the sides.

The third study involved 467 people and looked at a made-up incident of supposed desecration of Australian war graves in the Philippines by Filipino soldiers. The scenario described how a group of soldiers urinated on the graves and was left unpunished due to corruption in the country. The experiment asked people to react to a fabricated apology by President Duterte to the Australian people.

All the studies showed that an alleged apology from the country that made the offense opened the door to reconciliation and eventual forgiveness. Hope was a vital element of that process, found the researchers. The possible apology led to hope of a reconciled future.

The studies also showed that there were some situations where an apology would not work. This could be in the case of a long-entrenched situation where history and ideology makes it impossible for people to believe that any meaningful change could take place, regardless of the apology. The same holds true if the victims just have no desire for reconciliation.

“People enlist hope in situations of uncertainty, and hope jumps exponentially when a possibility of success emerges,” write the scientists. “Hence, an apology may be particularly effective when the situation is bleak, when the relationship is under real threat, but not beyond repair.”

You can read the study here, in the Journal of Experimental Social Psychology.

Psychologists are finding that moral code violations can leave an enduring mark — and may require new types of therapy.
Up Next
Personal Growth

Why Don’t We Talk About Anxiety Disorder More Often?

Anxiety is now the number one disorder on the planet. Yet it’s oddly ignored from public conversation.