Remember the days when you’d meet someone who’d humble-brag about their multitasking abilities? And remember the satisfying feeling of schadenfreude when studies came out saying that doing a bunch of things at once was really just a way of doing several jobs poorly at the same time? Well — oh joy — here’s another study saying that multitasking actually does boost productivity. Or at least believing that you’re multitasking does.

The study, recently published in Psychological Science, is called “The Illusion of Multitasking and Its Positive Effect on Performance,” and it was concerned with finding out whether or not having a sense that you’re doing two things at once leads to better work output. It encompassed 32 studies and a total of 8,242 participants. The authors are University of Michigan’s Shalena Srna, University of Pennsylvania’s Rom Y. Schrift, and Yale’s Gal Zauberman. 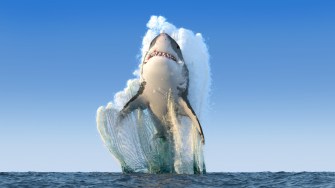 One experiment described in the study saw two groups of subjects asked to transcribe the narration of an Animal Planet video from Shark Week. The job was described to one group as a “learning task,” the implication being that they were to absorb the video’s content as they transcribed it. For the other group, it was just a transcription job.

After the experiment, the researchers tallied how both groups did, and found that the “learning” group transcribed more words, did it faster, and did it more accurately.

One explanation that comes to mind is that the multitasking group, listening more carefully for learning purposes, was better positioned to glean the meaning of transcribed words and phrases and self-correct accordingly. Certainly, they were more engaged than the transcription-only group.

Second, while the study concludes that this was an experiment assessing the illusion of multitasking, was it really an illusion? The multitasking group was trying to learn (Task 1) as they transcribed (Task 2). For the other group, it was just a listening/typing assignment. At yet the same time, it’s fair to ask if this was true multitasking when the two jobs were so closely interrelated. This is not like talking on the phone while editing, for example — it’s more like holding a nail while you hit it with a hammer.

The researchers conducted a variety of online and lab tests in which subjects solved pairs of word puzzles, including word-finding grids and anagrams in need of unscrambling. Multitask subjects were shown two puzzles on a same-color background to suggest that they were to be solved together, and for some subjects this was reinforced with instructions telling them that they were in fact being tested on multitasking. Other subjects saw the puzzles displayed on different backgrounds to visually separate them, and some were also told that the puzzles belonged to separate studies.

Once again, those subjects who believed themselves to be multitasking did a better job.

The authors of the study were naturally interested in seeing if there was physiological evidence of the different ways multitaskers and mono-taskers might be approaching their assignments.

It was observed that pupil dilation was consistently greater in multitasking subjects. While the suspicion is that these subjects were more engaged and thus taking in more information at once, the study notes that it’s hard to be sure: “Given the correlational nature of any mediation analysis, one should be cautious with causality interpretations between pupil dilation and performance. In particular, participants’ pupils might have been dilated because of happiness and excitement from finding more words (i.e., reverse causality).”

The study’s authors note that “multitasking is often a matter of perception,” and they feel they’ve demonstrated that “the exact same activity may or may not be perceived as multitasking.” In the end, the study doesn’t let actual multitasking off the hook: “These findings do not suggest that multitasking is superior to single tasking. Voluminous research demonstrates that working on more than one task is detrimental to performance.” In any event, literal multitasking is impossible, anyway — we’re serial creatures, so what seems like doing multiple things at once is really just us switching back and forth between them quickly.

Still, the authors do conclude that the illusion of multitasking can increase performance through greater engagement. The authors suggest that a person might in fact increase the quality of their work output with a simple perspective-switch of “separating an activity into its components and merely creating the perception of multitasking.” They mention, by way of example, that reading their study requires reading text and looking at graphs, and that even these two small role switches could qualify as multitasking if one wanted to see them the way.

You can try this little mind trick out for yourself and see if it helps you get more done, and better. Not while you’re driving, though.

Your inner voice can be the devil on your shoulder or the angel. It depends on where your focus lies.
Up Next
The Present

David Attenborough: Extinction of the natural world is ‘on the horizon’

Attenborough told the audience at COP24 that climate change is “our greatest threat in thousands of years.”