There will always be a lot of discussion around who the next Batman will be. Equally important, however, is the nemesis. The Joker is an easy choice, with varying degrees of success. You’re always in for a fun ride with Penguin. Few can argue that Tom Hardy didn’t nail Bane. Personally, I’ve long been a Riddler fan, though no on-screen performance will likely satisfy his role in the comics.

There is no hero without a nemesis. Predating comic books, mythology made this point long ago. We continue to honor the love between Rama and Sita, but that story is only meaningful due to Ravana’s thwarted attempt to forever imprison the goddess. Rama’s epic victory over Ravana was greatly aided by Hanuman; there are many beneficiaries to heroes having rivals.

Mathematician and economist Eric Weinstein takes the idea seriously. In a video posted shortly before he switched offices at his job as Managing Director at Thiel Capital, he points to a drawing of his archnemesis on the window. The baldheaded face staring at him every day is theoretical physicist Garrett Lisi, whose 2007 paper, “An Exceptionally Simple Theory of Everything,” proposes a unified field theory based on E8—what Weinstein calls a “248 dimensional beast of an object.”

Advice for Beginners: Choosing Your Arch-Nemesis to Last a Lifetime.

Advice for Beginners: Choosing Your Archnemesis to Last a Lifetime.

Weinstein doesn’t believe Lisi’s theory works, or will work anytime in the future. The fact that Lisi is not simply playing with the math but actually proposing a groundbreaking idea is what fuels Weinstein. He continues,

“It is clearly an attempt to explain the world we live in using a very complicated piece of mathematical machinery. And despite the fact that I don’t think that it works or even can be made to work, it is still a direct attempt at resolving the major puzzles of our time.”

This also happens to be Weinstein’s goal, one which he is exploring with his new podcast, The Portal. It makes sense that he’d choose someone working on a similar goal to stare at every day; knowing the competition is breathing down your neck fuels your own success.

Weinstein offers his criteria for choosing an archnemesis:

It should be somebody that you want to see in this world. You should want someone competing against you for the “long haul.” If they were to perish suddenly, their loss would sadden you. If your life’s work is really that important to you, you need to envision that rival walking every step beside you.

It should be somebody that accepts you as their archnemesis. It doesn’t really work if it’s one-sided. There’s already a venue for that: Twitter. Inventing enemies is easy, but if the object of your disaffection doesn’t even know you exist, or ignores you completely, they are not a proper nemesis. Without mutual obsession the concept fails.

If you lose, you want them to win. Talk about ego stepping aside. But there’s the rub: If you crave glory, you have to be capable of accepting defeat, which implies that your nemesis takes the crown. If Weinstein’s “geometric unity” is infeasible, he’d be all for E8 dominating the field. 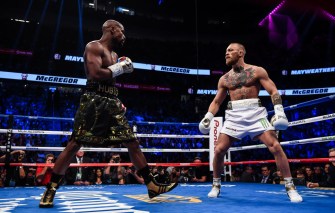 Weinstein debated the validity of scribbling Lisi’s photo onto his office window until he saw photographs taken inside of Floyd Mayweather’s home. Giant portraits of Conor McGregor were visible. The months leading up to their highly-publicized battle were intense. Mayweather, the victor of that fight, needed those totems for inspiration. In fact, Mayweather continues to battle Manny Pacquiao on Instagram over a fight that occurred four years ago. A nemesis is necessary at high levels of competition.

While Weinstein generally agrees with his friend and boss, Peter Thiel, regarding the dangers of obsessing over a competitor, he feels that an archnemesis is an exception to this rule. A nemesis provides personal motivation. When you get blocked, distracted, or discouraged, knowing someone is working on the same problem as you is a reminder that there’s no time to waste.

At the end of the video, Weinstein can be seen erasing the image of Lisi. He couldn’t allow the cleaning crew to do the work he had to himself. Whether or not Lisi made it onto the window of his new office is irrelevant: in his mind and heart, the theoretical physicist remains an archnemesis for life. Weinstein would have it no other way.

How to be more creative: Psychology recommends these five habits.

The 5-hour rule: How to turn a wasted day into a successful one

We each have the same 24 hours in the day. How will you spend yours?
The Present

Improve your problem-solving with elastic thinking

Elastic thinking can reveal the assumptions that hamstring our ability to solve seemingly intractable problems.
Thinking

You can’t control external threats, but you can manage how you prepare and respond to the risk.
▸
with
Stanley McChrystal
Up Next
Neuropsych

How meditation can make you a better learner

Meditation doesn’t just reduce stress or make you a more spiritual person; it changes your brain in a variety of ways that can make it easier to learn new information.